It is National Writing Day (27 June 2018), where the nation comes together to promote great stories and storytellers. Professor Helen Smith, Head of the University of York's Department of English and Related Literature, comments on the physical work of writing: 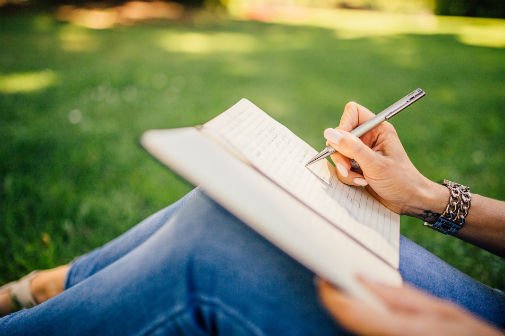 "Today is National Writing Day, an event designed to encourage us to put pen to paper (or fingers to keys) and find a way to tell our stories. But how often do we think about the physical work involved in writing?

"Writing is a whole-body experience, which asks us to adopt specific postures, and creates an intimate connection between us and our writing tools -- perhaps most especially in the arts of Chinese and Japanese calligraphy, whose practitioners trace the motions of writing over and over again, writing with water rather than ink, to perfect the movement and shape of letter forms.

"The early modern woman writer and scientist, Margaret Cavendish, Duchess of Newcastle, was especially alert to the hardships of writing. In one of her Sociable letters, Cavendish complained: ‘I write this Letter with no Small Difficulty, for though I sit so near the Fire, as I have Burn'd a part of my Clothes, yet the Cold is so Furious, as it doth not only Freez the Ink in the Standish, but in the Pen I am writing with, so that I am but a Cold Writer, nay, the very Thoughts seem to be Frozen in my Brain, for they Move very Slowly, as if they were Stupified’.

For Cavendish, the work of writing and the work of thinking were as one: the physical behaviour of her writing materials, and the discomfort of her own cold room, were part and parcel of the slowness of the ideas she dragged from her frozen brain.

"Cavendish was also conscious of how her writing might appear to others; she remarked frequently that her handwriting was really very bad. In her Sociable letters, she apologises to her unnamed correspondent that her page is marked with ‘such huge Blots, as I may Similize them to Broad Seas, or Vast Mountains...; Also there are Long Hard Scratches, which will be as Bad for your Eyes, as Long, Stony Lanes would be to your Feet’.

"If writing was hard work for Cavendish, reading, she suggests, was a physical as well as mental struggle for anyone who tried to unpick her letters. There’s a twofold irony to her complaint: on the one hand, Cavendish’s handwriting is really not that bad, and on the other, these letters were reproduced in print, and so ask the reader to imagine, rather than directly experience, the writing body behind the printed page.

"So, if your handwriting needs improvement, or you have a tricky relationship with your computer keyboard, just remember Margaret Cavendish, and console yourself with the thought that you are part of a proud tradition not just of writing, but of writing about writing, and of bringing the physical labour of creating texts into view."