An environmental historian from the University of York is swapping Heslington campus for the forests, lakes and rivers of Russia and Ukraine as part of a research project studying the environment of the countries from Tsarist to post-Soviet times.

Solovetsky Monastery situated on the Solovetsky Islands in the White Sea - just one of the sites already visited by the study team (credit: Abi Sutton)

Anniversary Professor David Moon from the University’s Department of History, is leading a network of British, American and Russian academics in a series of field trips to some of the  most important ecological areas. The team are studying how history has shaped the relationship between people and the area's rich natural resources such as oil and gas.

The research includes a visit to the Chernobyl Exclusion Zone in Ukraine, the site of one of the world’s worst environmental disasters, to examine the impact of the catastrophic explosion and radiation leak in 1986 on the ecology of the surrounding area.

It is only by studying the landscape and talking to the people who live there that we can understand how the relationship between people and the environment has evolved over the years.

The three-year project, Exploring Russia's Environmental History and Natural Resources, is funded by a £123,000 grant from the Leverhulme Trust.

Professor Moon said:  “Unlike many historical investigations, this project is not confined to archives or libraries. The field trips are an important part of the research. It is only by studying the landscape and talking to the people who live there that we can understand how the relationship between people and the environment has evolved over the years.

“The visit to the Chernobyl site next summer will give us fascinating insights into the impact of the disaster, and the exclusion of most of the population, on nature. The zone is like a vast environmental laboratory which could help our understanding of the long-term impacts of such disasters.” 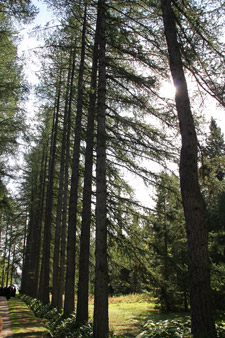 The botanical gardens on the Solovetsky islands (credit: Nicholas Breyfogle)

The project team has already visited St Petersburg and the Volkhov Hydroelectric Power Station, the oldest and longest serving hydroelectric plant in Russia. They visited the Solovetsky Islands in the White Sea, an ancient fishing community just south of the Arctic Circle. The final field trip in 2015 will study conservation at Lake Baikal in Siberia, one of the largest expanses of freshwater in the world.

The work will culminate with a conference in York planned for 2016.

Professor Moon said: “When we think of the environment in Russia or the Soviet Union, it conjures up images of gargantuan schemes to conquer nature by diverting rivers or ruthless exploitation of natural resources such as oil and gas. We will look at the undeniable damage this exploitation has caused to the environment in places such as Chernobyl, but we will also study how science and technology have assisted in understanding and protecting the environment. The project aims to offer a valuable historical perspective on contemporary environmental issues.”

Interested to find out more about this type of research? Read a blog about the work including field trip photographs.