Renaissance scholar puts his finger on the manicule

We have all seen it and we all know what it means — but what is it called? The ‘hand with pointing finger’ symbol has been used for centuries to point us to places, to sell us things and to draw our eyes to important messages. 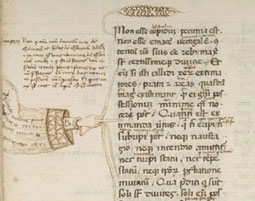 The US postal service stamps it on envelopes ‘returned to sender’ and the Blue Meanies use it as a weapon in the Beatles’ Yellow Submarine. But it is also found in the margins of many old books and manuscripts and may be the most common symbol produced for and by readers between the 13th and 18th centuries.

This is one of the surprising conclusions in William Sherman’s new book, Used Books: Marking Readers in Renaissance England. Sherman (Professor of English and Co-Director of the Centre for Renaissance and Early Modern Studies) looked at thousands of books on both sides of the Atlantic in search of the marks left behind by early readers: the results have been described by Anthony Grafton (Professor of History at Princeton) as ‘The first comprehensive account of the ways of readers when books held, or seemed to hold, the answers to all of the most profound questions.’ Sherman’s book looks at scathing marginalia, scholarly indexes, and even smears of food and asks what they can teach us about the lives of old books and their place in the lives of the readers who came before us.

Of all the marks he encountered, the pointing hands were the ones that most consistently caught his eye: some of them drawn by readers had elegant cuffs or coloured bracelets and in some the fingers were extended to many times their natural length. They were all used for the same purpose — to point to an important passage in the text — but there has never been a single, established term for them. After considering ‘fist,’ ‘index,’ and many other options, Sherman settled on ‘manicule’ (the technical term used by manuscript experts, from the Latin for ‘little hand’). 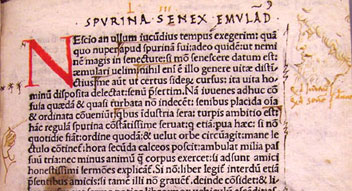 Sherman’s work has inspired a Wikipedia entry and a Flickr group where people can send in photos of pointing hands of all kinds. And as he continues to study manicules they continue to point him to new discoveries — most recently, a long-lost book from one of the Renaissance period’s most important libraries. At the end of January he was invited to give a master class on marginalia at Stanford University, and among the books selected by the librarian for the class to look at was a 1483 copy of the letters of Pliny the Younger. When Sherman opened the book he was astonished to find the same manicules as those used on the cover of Used Books and he quickly identified the learned and playful annotator as none other than Bernardo Bembo (1433-1519), Venetian scholar and statesman and father to the famous poet Cardinal Pietro Bembo. This was one of Bembo’s most treasured books and it has at long last been put back in the hands of its original owner.

William Sherman is a Professor in the Department of English and Related Literature, and is Director of the Centre for Renaissance and Early Modern Studies 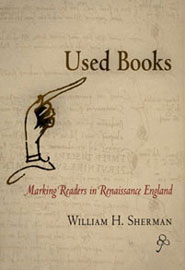