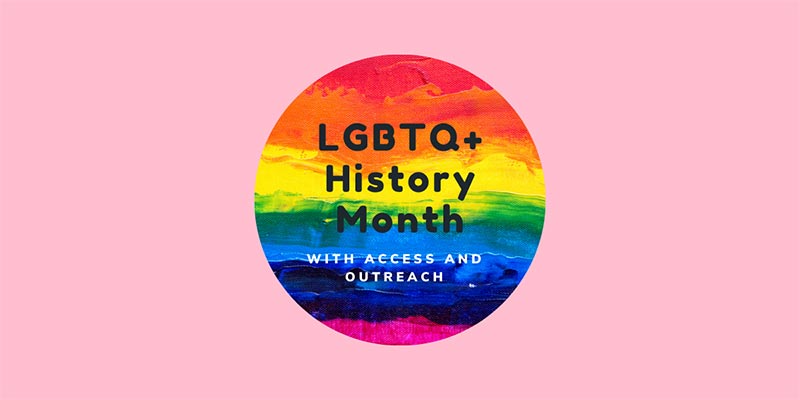 Find out about our LGBTQ+ community at York and join in the celebrations.

Welcome to the LGBTQ+ History Month takeover with the University of York’s Access and Outreach team.

LGBTQ+ History Month aims to increase the visibility of lesbian, gay, bisexual and transgender people. The month raises awareness of the community's history, lives and experiences in education, culture and society. In the United Kingdom it is celebrated in February each year, to coincide with the 2003 abolition of Section 28.

I have found colleagues and friends at work to be very receptive to educational conversations about LGBTQ+ support. I see more and more people across the University including their pronouns in email signatures and moving towards using gender-neutral language. I’m proud to work somewhere where I can bring my whole gay self to work.

Hear from more LGBTQ+ members of the University community:

Being queer at York

How is the University marking LGBTQ+ History Month?

Ahead of LGBTQ+ History Month 2021 we unveiled our first all-inclusive crossing point on campus, which incorporates the colours of the Progress Pride Flag.

We recently announced that our newest college will be named after famous diarist Anne Lister, who is often described as the first modern lesbian. Anne's story was recently told in the BBC series Gentleman Jack, written and directed by York alumna Sally Wainwright.

A brief history of Section 28 and its legacy

In May 1988, the Conservative government led by Prime Minister Margaret Thatcher introduced the now infamous Section 28 legislation that banned the ‘promotion’ of homosexuality by local authorities and in schools. This meant that teachers were prohibited from discussing even the possibility of same-sex relationships with students, while councils were forbidden from stocking libraries with literature that contained gay or lesbian themes.

It was a law that led to protests in the BBC, the House of Lords and the streets of Manchester. Actor Ian McKellen came out as gay in order to fight it, and the protests inspired songs by Boy George and Chumbawamba. In 2009 the then Conservative Leader of the Opposition, David Cameron, apologised, admitting the clause was a ‘mistake’.

The LGBTQ+ community rose up against the government’s censorship and restrictions on their rights. Three lesbian protestors abseiled from the public gallery of the House of Lords into the chamber, making national news and drawing public attention to their cause. Activists then stormed the BBC, handcuffing themselves to a TV camera and disrupting a live broadcast of the Six O'Clock News, while in Manchester more than 20,000 people marched against the legislation.

Opponents argued that by excluding homosexual support groups and appearing to prevent teachers from protecting victims of homophobic bullying, Section 28 was actually endangering vulnerable children. They also argued that Section 28 was a law that gave the impression to the public that the government sanctioned homophobia. Gradually public opinion turned as more prominent figures in society came out against the law.

It was not until 2003 that Section 28 was repealed. Even with Section 28 repealed by law, local councils could still pass their own versions of Section 28 - although this was eventually curbed by the Equality Act in 2010.

Click on one of the figures below to find out more about their lives.

have lots of advice and information, as well as details on how to get involved with campaigning.

have lots of advice for young people on their website, as well as a search tool to find your local LGBTQ+ youth group.

work with young people and their parents and carers who feel at odds with the gender they have been assigned at birth.

run projects for young people who identify as trans. Their Knowledge is Power resource is a great educational tool.