Author and historian Lucy Adlington will be the keynote speaker at a special online event being hosted by the University of York to commemorate Holocaust Memorial Day. 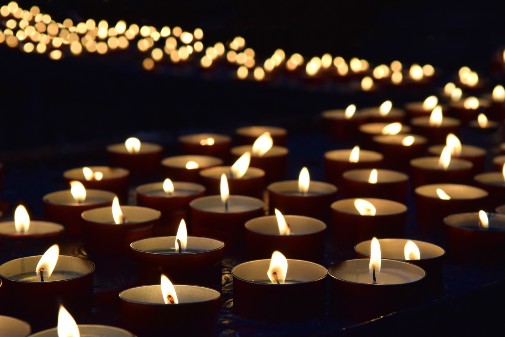 Holocaust Memorial Day is dedicated to the remembrance of the Jews and others who suffered in the Holocaust, under Nazi persecution.

The event will feature talks and short films reflecting on the Holocaust and its theme for 2022, One Day.

Lucy Adlington will reflect on her recent book The Dressmakers of Auschwitz. The True Story of the Women Who Sewed to Survive at the event.

Hosted by the Lord Mayor of York and the University’s Vice-Chancellor, the event will also feature short talks by Paul Wordsworth, City of Sanctuary York co-ordinator and trustee, and Adam Caplan, President of the Jewish Society at the University of York, as well as two short films.

Holocaust Memorial Day is One Day where we come together to remember and learn about the Holocaust, Nazi Persecution and the genocides that followed in Cambodia, Rwanda, Bosnia and Darfur, in the hope that there may be One Day in the future without any genocide. In doing so, we learn more about the past, we empathise with others today, and we take action for a better future.

Mainly Jewish women and girls, they were selected to design, cut, and sew beautiful fashions for elite Nazi women in a dedicated salon. It was work that they hoped would spare them from the gas chambers.

Drawing on diverse sources - including interviews with the last surviving seamstress - The Dressmakers of Auschwitz follows the fates of these brave women. Their bonds of family and friendship not only helped them endure persecution but also to play their part in camp resistance. Weaving the dressmakers' remarkable experiences within the context of Nazi policies for plunder and exploitation, Lucy Adlington exposes the greed, cruelty, and hypocrisy of the Third Reich and offers a fresh look at a little-known chapter of World War II and the Holocaust.

Lucy Adlington is an author, presenter, and keen collector of vintage and antique costume. She writes both history-inspired fiction and fascinating social history books.

Vice-Chancellor Professor Charlie Jeffery said: "Since our foundation in 1963, the University of York has had a proud history of promoting inclusivity and offering sanctuary. As a University for public good, we welcome students and staff from over 150 different countries, including those where people may be fleeing persecution, where academics may be at risk, as well as those where human rights defenders face a number of dangers and challenges.

"So we are honoured to be hosting this important event with the York Holocaust Memorial Day Steering Group, who with The City of York Council, have been programming and supporting events across the City for 14 years.

"Their continued commitment ensures that the vital messages around Holocaust Memorial Day are visible and meaningful to people of all ages in York and we thank them for this."

Councillor Darryl Smalley, Executive Member for Culture, Leisure and Communities at City of York Council, said: "York is proud to stand with others once again, to raise awareness and commemorate Holocaust Memorial Day. It is an opportunity for us all to remember and learn more about not just the horrors of the holocaust, but also the genocides that followed.

"We know that anti-Semitism, prejudice and discrimination still disfigures the lives of millions across the world – it’s as important as ever that we all work towards a world free from hate."

More information on Holocaust Memorial Day can be found at Hmd.org.uk.

If you would like, we invite you to join the nation in lighting a candle at 8pm on 27 January to remember those who were murdered for who they were and to stand against prejudice today. The Yellow Candle Project UK website, offers the opportunity to order a single remembrance candle, with a card with the name, age, date, and place of death of someone who perished in the Holocaust is enclosed.