One year on: University base for homeless volunteer group

HOPING Street Kitchen, a volunteer group that offers hot, nourishing food and essentials to the homeless community in York, is celebrating one year in its new home at the University of York’s King’s Manor. 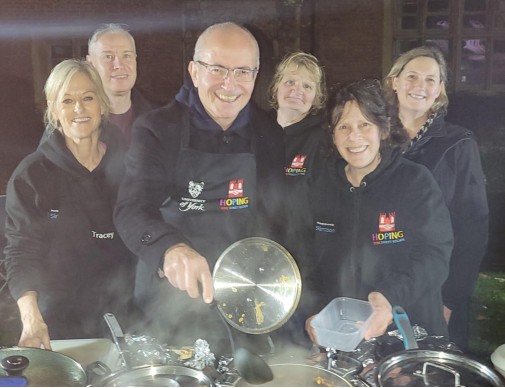 To mark the occasion, the University of York’s Vice-Chancellor Professor Charlie Jeffery, joined HOPING volunteers to give hands-on help, serving food for the evening at the street kitchen.

The group, which previously set up in Kings Square, was told it was no longer able to access the area with vehicles during its usual opening hours due to changes in footstreet restrictions.

When the group appealed to local institutions for support in the local press, the University of York quickly responded by offering space at its historic King’s Manor for the group to operate from. The University’s estates and hospitality teams also assisted, by advising the group on aspects of food hygiene, and the general health and safety of their operation.

HOPING’s co-ordinator, Helen Meadows, said: “We know that more and more families are in the ‘only just coping’ category.

“The recession and cost of living crisis is pushing more local people into poverty.  We are really touched by York residents’ and businesses’ generosity in making donations, but we also know that we couldn’t deliver the comfort and support we offer without organisations like the University of York stepping in to help.”

The charity is run entirely by unpaid volunteers and relies entirely on donations from business organisations, grants and lottery funding, as well as the generosity of individuals.

Around 20 people came to the kitchen for meals each week, but one year on and the number has grown to 70, with numbers expecting to increase.

Professor Jeffery said: “As a York institution, we are absolutely committed to playing our full part in supporting the local community.

“Students and staff engage with a range of charities, but HOPING stands out because it reflects the real spirit of our great city – volunteers selflessly offering practical help and caring support to those in desperate need.

“We are so proud to be able to provide the city centre space from which they can work effectively.  In these times, helping the homeless and those in need is more vital than ever.”