An international team of physicists has used theoretical techniques to predict the existence of metallic liquid hydrogen at low temperature and high pressure.

The nature of dense hydrogen is a central problem in physics and its abundance, for example, in gas giants such as Jupiter and Saturn means it is critical to our understanding of the universe. 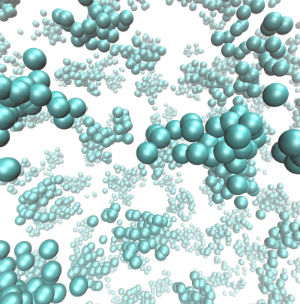 The team’s findings are reported in Nature Communications.

Author Dr Matt Probert, from York’s Department of Physics, said: "Hydrogen is central to our understanding of so much of the universe, from interstellar gas clouds to the cores of gas giant planets, and yet there are still lots of things we do not yet know. This paper is a theoretical breakthrough which expands our detailed knowledge of the high pressure properties of hydrogen, and shows that at high pressures and low temperatures both the solid and liquid forms of hydrogen are metallic."

In spite of enormous progress over the last 80 years, important gaps in the understanding of the hydrogen phase diagram remain. Arguably the most challenging issue is the solid to liquid melting transition at ultra-high pressures.

The melting temperature of solid hydrogen is known to fall at high pressures and it had been speculated that a metallic liquid state might exist at low temperatures.

Hydrogen is central to our understanding of so much of the universe, from interstellar gas clouds to the cores of gas giant planets, and yet there are still lots of things we do not yet know

This study looked at the melting of hydrogen by computer simulation of the coexistence of the solid and liquid phases, taking the quantum motion of the protons into account explicitly for the first time.

The findings show a low-temperature metallic atomic liquid phase of hydrogen at pressures 900 GPa and above, down to 50K, the lowest temperature that can be reliably simulated. The existence of this low temperature liquid is associated with a negative slope of the melting line between atomic liquid and solid phases at pressures between 500 and 800 GPa.

This study confirms the existence of this phase in simulations and shows how the quantum motion of the protons plays a critical role in its stabilisation.

Lead author Professor Xin-Zheng Li, from Peking University, said: “It's very exciting that computational techniques based on quantum mechanics have reached such a state of maturity that reliable predictions about the properties of hydrogen at these extreme pressures can now be made. All we need now is for experiment to catch up and provide support for our predictions."