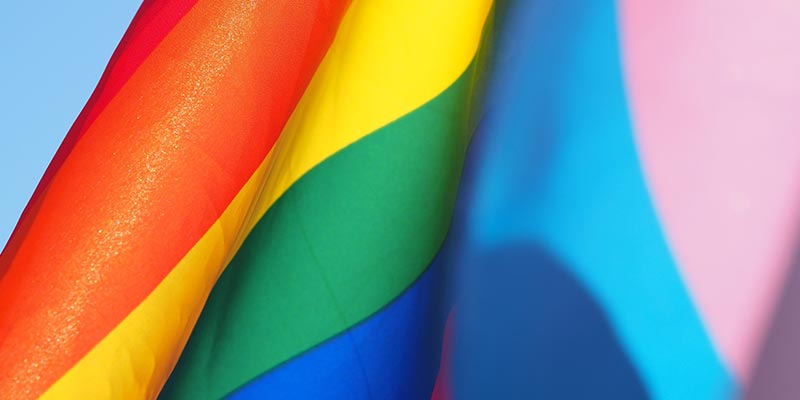 It is important not to confuse sexual orientation with gender identity as the two are not the same. For instance, trans people, like any other people, can have a wide range of sexual orientations, including heterosexual, lesbian, gay, bisexual, asexual, pansexual, omnisexual and demisexual.136

136 Trans staff and students in HE and colleges: improving experiences

Some of the terminology and definitions used in this glossary relate to subject matter that may be upsetting or triggering for some people.

Someone who experiences sexual attraction to other people. Allosexual is the opposite of ‘asexual’ and is an umbrella term used to refer to people who do not identify as asexual. For instance, allosexual people may self-identify as gay, straight, bi, queer or several other sexual orientations. Also see the ‘Asexual or Ace’ definition.

Someone who experiences romantic attraction to other people. This is the opposite of ‘aromantic’. Alloromantic people may self-define as gay, straight, bi, queer, or any other romantic orientation. Also see the ‘Aromantic or Aro’ definition.

This term describes a person who is curious about having sexual relations with a same gender/sex person. This term is most commonly associated with heterosexual people who are either questioning or experimenting with their sexual orientation, and it is only ever used incorrectly in reference to people who are bisexual.

Biphobia is discrimination, prejudice or abusive behaviours towards bisexual people.118

These are umbrella terms used to describe a romantic and/or sexual orientation towards more than one gender. Bi people may describe themselves using one or more of a wide variety of terms, including but not limited to, bisexual, pan, queer, and some other non-monosexual and non-monoromantic identities.119

Butch is a term used within the LGBT+ community to refer to someone’s gender expression and/or presentation, which is typically masculine. This is particularly used in reference to people who were assigned and/or who identify as female. There are other identities within the scope of butch, such as ‘soft butch’ and ‘stone butch’. You should not use any of these terms in reference to someone unless you know they identify with them and are comfortable with you using them.120

An individual’s decision to abstain from all sexual activity, regardless of sexual or romantic attraction to other people. Celibacy is not the same as asexuality or aromantic as it is a behaviour rooted in choice, not a person’s sexual orientation, and is only included here in order to make that distinction.

The opposite to being ‘out’, this term refers to an individual who has either chosen or who is forced to keep their sexual orientation and/or gender identity concealed and is therefore presumed to be heterosexual and/or cisgender.

When a person first tells someone/others about their sexual orientation and/or their gender identity.121 It is important to note that some LGBT+ people may not have chosen to tell everyone in their lives about their gender identity and/or sexual orientation. It may be the case that, for a variety of reasons, LGBT+ individuals are forced to ‘come out’ multiple times and at different stages of their lives in different situations and environments. This is likely to be difficult given that they may experience more or less support or acceptance depending on the circumstances.

A psychological practise that is based on the belief that an individual’s sexual orientation and/or their gender identity, if it is not aligned to the sex they were assigned at birth, can be altered or ‘cured’ by health and social care interventions. The practise of conversion therapy has been thoroughly criticised and condemned in the majority of countries because of its harmful effects on individuals and the inherent lack of understanding and discrimination of LGBT+ communities that have been associated with it.

A person who may only experience a romantic attraction to someone after establishing a strong emotional connection.

A person who may only experience a sexual attraction to someone after establishing a close emotional and/or romantic connection with them.

Femme is a term used within the LGBT+ community to describe someone who expresses themselves in a typically feminine way. There are other identities within the scope of femme, such as ‘low femme’, ‘high femme’, and ‘hard femme’. You should not use these terms in reference to someone unless you know they identify with them and are comfortable with you using them.122

A man who has a romantic and/or sexual orientation towards other men. It is also a generic term for lesbian and gay sexuality, as some women define themselves as gay rather than lesbian. Some nonbinary people may also identify with this term.123

Similar to ‘heterosexism’, heteronormative is a term used to describe the way in which gender and sexuality are separated into hierarchically organised categories which creates a cultural bias in favour of opposite-sex relationships and against same-sex relationships of a sexual nature. Examples include:

These terms refers to a man or woman who is romantically and/or sexually attracted to people of the opposite sex.

The individual, cultural and institutional assumption that all individuals are heterosexual. As a result of this assumption or bias, heterosexuality is favoured and society views it as the only natural, normal or acceptable sexual orientation, creating an imbalance of power and marginalising people who do not identify as heterosexual.

A person who has a romantic and/or sexual orientation towards someone of the same gender. This term is considered to be a medicalised term and therefore ‘gay’ tends to be more widely used.126

LGBT+ is an acronym for Lesbian, Gay, Bisexual and Transgender people. The ‘+’ symbol recognises other identities which either do not fall into these categories or are not explicitly referenced, such as queer, questioning, nonbinary, intersex, gender-fluid, asexual, aromantic and several others.

It is important to acknowledge that while this and other acronyms are widely used by individuals and institutions, the LGBT+ community is not a single homogeneous group and the experiences of all individuals who identify within this wider community are different. For instance, being trans or having a trans history is different from sexual orientation; however, trans people may also identify as LGB+. However, the forms of prejudice and discrimination directed against trans people can be similar to those directed against lesbian, gay, bisexual, + (LGB+) people, and historically the two communities have coexisted and supported each other. As a result, advocacy and support groups often (but not always) cover LGBT+ issues together.127

There are other variations of this acronym such as LGBTQ+ and LGBTI+, which are commonly used to refer to the identities of people who may not feel that ‘LGBT+’ describes them accurately and who may identify as queer, questioning, asexual, intersexual, pansexual, unsure, or in a number of other ways.128

For consistency, the University predominantly uses the ‘LGBT+’ acronym in communications and publicity, however it recognises that LGBT+, or indeed any other acronym, is not an exhaustive term and not all groups, institutions or individuals will choose to use or feel comfortable using the same acronym. For instance, there are specific examples within the University where other acronyms are in use, such as the LGBTI+ Matters Staff Network and the YUSU LGBTQ+ Network.

127 Trans staff and students in HE and colleges: improving experiences

A woman who has a romantic and/or sexual orientation towards other women. Some nonbinary people may also identify with this term.129 The words ‘lesbian’ and ‘gay’ are terms which most lesbians and gay men prefer to use rather than ‘homosexual’. Lesbians often prefer the term ‘lesbian’ rather than ‘gay’ or ‘gay woman’ because it acknowledges their separate identities and experiences, although this is not always the case.

The prejudice and discrimination that results from a fear or dislike of someone because they are, or are perceived to be, a lesbian.130

When a person’s sexual/romantic orientation and/or gender identity is disclosed to someone else, whether inadvertently or intentionally, without their consent.131 The act of outing an individual deprives them of their right to choose when, how and to whom they wish to disclose their personal information and can often lead to discrimination. Also see ‘coming out’.

An individual’s potential for sexual or romantic attraction toward people of any gender identity, and is therefore a sexual/romantic orientation that is not limited by gender.

An individual’s expression of confidence in and celebration of their own LGBT+ identity and the community to which they belong. It also refers to the annual public event that is held in many countries and cities across the world where members of the LGBT+ community and their allies come together, often in the form of a street parade, to protest against LGBT+ related injustices and also to celebrate their identity, culture and history.

Note that there are ‘pride’ movements and events related to other protected characteristics, such as disability.

This is a flag that incorporates the colours of the longstanding Rainbow Flag, which is widely recognised as the symbol of lesbian, gay, bisexual and transgender communities, as well as including black and brown stripes to represent marginalised LGBT+ communities of colour. It also contains the colours pink, light blue and white, which are used on the Transgender Pride Flag. In addition, the black stripe also represents those living with AIDS, and those no longer living.

A term used by people who self-identify with romantic orientation, sexual orientation and/or gender identity categories that differ from heteronormative and cisnormative labels.

The word has been used historically as a slur against the LGBT+ community, however it was reclaimed in the late 80s by the queer community who have since embraced it.132 It is worth noting that not all members of the LGBT+ community are comfortable using the term due to its negative historical use.

A term used to refer to fear and/or hatred of people who self-identify as queer and who therefore do not adhere to heteronormative expectations.

The process an individual may undergo when exploring their own sexual/romantic orientation and/or gender identity.133

The rainbow flag has seen different iterations since its inception and there are also other flags that are used to demonstrate pride and show solidarity for specific sexual orientations and gender identities. Also see the ‘Progress Pride Flag’ definition.

Refers to a person’s romantic attraction to other people or lack thereof. Along with sexual orientation, this forms part of an individual’s overall orientation identity.134

136 Trans staff and students in HE and colleges: improving experiences