The discovery of the oldest house in Britain by a team from the University of York's Department of Archaeology has reshaped our understanding of the post-Ice Age hunter gatherers who lived on the site over 11,000 years ago.

How the Star Carr site might have looked 11,000 years ago. Image by Dominic Andrews

Studies of the ancient structures uncovered on the site at Star Carr, near Scarborough, have helped rewrite standard textbook descriptions of the nomadic groups who recolonised Britain at the end of the last Ice Age. Previously viewed as rootless drifters engaged in a never-ending search for prey, research by the team from York has revealed a more sophisticated, settled community with strong societal and generational ties.

Professor Nicky Milner from York’s Department of Archaeology who uncovered the house at Star Carr, along with a team from the University of Manchester, said it was a sensational discovery which has shifted historical perceptions of some of our early ancestors.

“Previously, we thought hunter gatherers roamed across the landscape with no real connections to any sites or geographical areas. Evidence from Star Carr suggests that in fact this North Yorkshire site was occupied for between 200 to 500 years with the building being repaired and maintained to accommodate the changing needs ofthe generations who lived there.

“It suggests that people of this era were more attached to settlements than was previously thought. This is an important advance in our understanding and helps us challenge previously held beliefs about the way hunter gatherer society lived.

How our ancestors lived

“The quality and diversity of finds on this site makes it equal in archaeological importance to Stonehenge,” said Professor Milner. “This really is one of the most significant archaeological sites in the UK and it has the potential to greatly improve our understanding of the way our early ancestors lived, what their skills were and how their society was organised.” 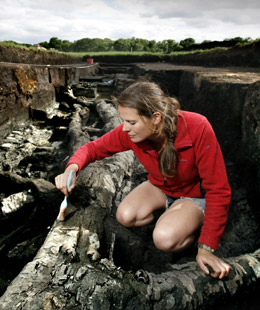 The house, a circular structure dating from the Mesolithic period at about 9,000 BC, is thought to be about 1000 years older than the previous oldest house uncovered at Howick in Northumberland. The people living here would have been amongst the first settlers returning after the glaciers of the Ice Age had retreated. At that time Britain would still have been joined to continental Europe.

The house is just the latest discovery on a site which has yielded a wide range of intriguing items since it was first the subject of research back in the 1940s. The York team are also examining a nearby wooden platform featuring some of the oldest examples of carpentry in Europe, plus a well preserved 11,000 year-old tree trunk with its bark still intact.

Other items have included a boat paddle, arrow tips and antler head-dresses which are thought to have been used in rituals or ceremonies.

The site, now designated by English Heritage as a Scheduled Monument, was once a lakeside settlement benefiting from wet, peaty conditions which have helped preserve many of the structures and artefacts.

The York team also investigated a site nearby known as Flixton Island. This is thought to date to the end of the Ice Age, several centuries earlier than Star Carr, when the climate was colder and the environment a tundra landscape. The excavation produced butchered horse bones and flint blades and the evidence here suggests a more mobile lifestyle for these earlier hunter gatherers.

The finds at both sites will be brought to life for local people at a major exhibition planned for the Yorkshire Museum in May which will set out the stories of Star Carr and Flixton Island alongside some of the finest archaeological artefacts found at the sites. A series of talks to local schools and societies plus a new book are also planned.

The archaeological investigations at the site are part of a five year programme funded by the European Research Council. The project is also a valuable local resource for York students who take part in the excavations and regularly focus on aspects of the site for PhD research.

Channel 4’s Time Team also recently filmed at the site as part of a wider programme about the Mesolithic period which will be aired this spring.

“One of the most exciting things about the site is that only about five per cent of it has been excavated,” said Professor Milner. “We are planning further excavations from May and we think the potential for uncovering further structures and artefacts is significant.

“There are so many unanswered questions about the site – what it was used for and how people lived. Every time we uncover something it poses more questions so the more work we do, the better our understanding of Star Carr and how it relates to this fascinating period of our history.”

Prostate cancer: Rooting out a killer