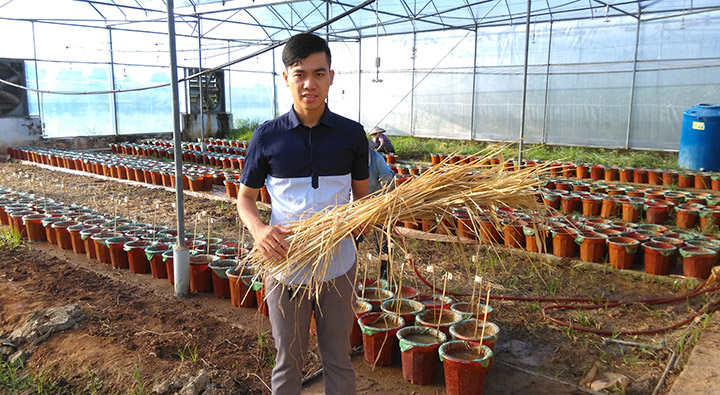 From rice straw to resource

Duong Nguyen is decoding the genetics of rice straw to transform it from a by-product that is often burned after harvest to a source of animal feed or green fuel.

I am a researcher at the Field Crops Research Centre in Vietnam where I am studying the genetic diversity of rice to help identify the genes that control the quality characteristics in rice straw. The genetic information has been extracted from a collection of rice cultivars known as the Vietnam Rice Diversity Panel. The collection includes traditional rice cultivars grown for centuries by local communities, and new high-yielding commercial cultivars grown in different regions and seasons. The Panel provides a cross section of the phenotypic - physical and chemical characteristics - of rice. The work is pivotal to studies under way in the Department of Biology at the University of York where researchers, led by Professor Simon McQueen-Mason, are identifying the genes that could create new strains of rice. The aim of the project is to produce rice straw with a higher nutritional content that can be used for animal feed and is also more readily converted into biofuel.

In many regions of South and Southeast Asia, farmers burn the straw and husks left over after the rice harvest. The smoke causes air pollution and contributes to the production of black carbon, a major driver of climate change. Our research will help to improve the quality of rice straw through breeding. This will transform the straw from a by-product that is burned in the field to a valuable source of biofuel and animal feed. The research is tackling a source of air pollution, while at the same time bringing benefits to farmers. It also helps wider efforts to improve food security in Vietnam and the Mekong Delta, which is prone to a number of challenges which global research like this is helping to solve.

How did you become involved in this work?

I worked with the research team led by Professor McQueen-Mason in a collaborative project, co-funded by BBSRC and the Vietnam Ministry of Science and Technology, on rice straw. The research from my MSc thesis, completed at the University of York in 2016, played an important part in this collaborative project. In my current role at the Field Crops Research Centre in Vietnam, I continue to collaborate with Professor McQueen-Mason and his team in the UK and at the Philippine Rice Research Institute (Philrice) on Newton and GCRF-funded projects.