Researchers at the University of York has shown that a drug commonly used to help smokers overcome addiction to cigarettes does not have the same effect in shisha smokers. 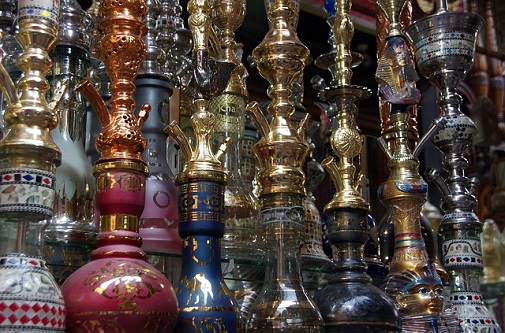 Shisha, or hookah smoking, is popular with young people across the globe

Smoking tobacco through a waterpipe, often referred to as shisha or hookah smoking, is becoming popular, particularly among young people, across the globe.  It is often considered a ‘safer’ alternative to cigarette smoking - a common misconception.

Research at the University of York, involving a trial with more than 500 daily shisha smokers in Pakistan, where shisha smoking is particularly common, showed that varenicline - a medication used to help tackle cigarette smoking - did not make a difference in assisting shisha smokers break the habit.

Professor Kamran Siddiqi, from the University of York’s Department of Health Sciences and Hull York Medical School, said: “Shisha smokers inhale large volumes of tobacco and charcoal smoke exposing themselves to the same health risks as cigarette smokers, including a variety of cancers.

“Flavoured tobacco smoking, such as fruit shisha, has become particularly popular with young people, and in some countries, the hookah is a tourist attraction in some bars and restaurants.

“Whilst most countries, Pakistan included, recognise the dangers of shisha smoking, it can be difficult to regulate and medications to help people quit can prove too expensive in some parts of the world.”

The research trial consisted of both men and women living in Pakistan; half were treated with the drug varenicline, and the other with a placebo drug. The treatment programme was supplemented with advice on changing behaviours to address some of the psychological aspects of addiction.

Results showed that varenicline was not more effective than placebo interventions. The researchers suggest that this is not necessarily because the drug does not work in shisha smokers, but that despite the willingness of participants to quit, only a minority made a serious attempt at quitting all forms of tobacco.

The study demonstrated that shisha smokers in the trial were highly dependent and many smoked cigarettes as well, reducing the efficacy of the drug.

Dr Omar Dogar, from the University of York’s Department of Health Sciences, said: “The drug, varenicline, attaches to the nicotine receptors in the brain and deactivates them, alleviating the symptoms of craving, but along with the drug there still has to be a willingness to quit smoking.

“There are many layers to addiction, neurological and psychological, and one of the things we found in this trial is that the social aspect of shisha smoking played a significant role in its appeal.  Almost 90% of our study participants smoked shisha with others.”

The study suggests that more work is needed to break the social norms of shisha smoking and improving tobacco control policies.  The way in which loose leaf tobacco is sold and bought in Pakistan, for example, means that standard packaging carrying health warnings do not always exist and it is still fairly cheap for most people to buy.

Professor Siddiqi said: “Shisha smokers may have a better chance of quitting if shisha smoking is less affordable and not served in cafes, bars and restaurants, as it is in many places in Asia and the Middle East.

“An approach, similar to that taken against cigarette smoking, to raise awareness of the risks, particularly with young people, and control its use in public spaces would be a step forward, alongside traditional drug and behavioural interventions.”

The research trial was supported by Pfizer and the study is published in the journal Addiction.