Ants on the march in non-native conifer forests

A species of ant is thriving in habitats created by thousands of acres of coniferous forest planted in a UK National Park in the last 60 years, according to new research by scientists from the Department of Biology at the University of York and Forest Research, the Forestry Commission’s research agency. 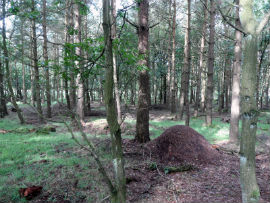 The success of the northern hairy wood ant (Formica lugubris) in colonising plantations of largely non-native coniferous species in the North York Moors National Park supports recent suggestions that non-native plantations can have positive influences on forest-dependent species. Forest cover in Britain has more than doubled over the last century and a half. Forests now cover 13 per cent of British land area compared with five per cent in 1900.

But much of this expansion is dominated by non-native coniferous species grown for commercial forestry. Large areas of the current plantations are in areas where there were no forests until 60 or so years ago. This research published in Forest Ecology and Management shows that there has been a remarkable expansion of the population of the northern hairy wood ant into new plantations that were close to established woodlands.

Duncan Procter, who is a PhD student in the Department of Biology at York and also a member of the York Centre for Complex Systems Analysis, mapped more than 5,500 ant nests that were mostly on the edges of coniferous plantations in the North York Moors.

“The northern hairy wood ant is a keystone species in forests because it supports a wide range of birds and invertebrates.  Some of the latter are only found in the wood ants’ nests which, as they are large mounds of organic matter, play an important role in the decomposition cycle of the forest,” he said.

Colonisation of these new conifer habitats has, however, been slow -- the survey data showing that current wood ant populations have only extended up to a maximum of 800 metres from where forest was in the past.  Nevertheless, geographical population expansions into newly formed forest suggest that the recently planted non-native conifer plantations are a suitable habitat for this forest specialist species.

Duncan Procter added: “Our work reveals that Formica lugubris has not yet spread through all available suitable habitat due to its very poor dispersal ability, displaying a severe lag behind the availability of new habitat.

“We believe, therefore, that we should re-assess the idea that a coniferous monoculture is bad for diversity. Forest managers should not assume that unoccupied habitat is unsuitable if species have not yet had a chance to disperse to it nor should they expect to see immediate colonisation of plantations.

“Future forest creation should be targeted close to existing woodland to facilitate colonisation by these forest specialists. Just because you don’t see a species in a particular location at the moment doesn’t mean it’s not a good habitat for it.”

Co-author Dr Elva Robinson, of the Department of Biology at York, said: “It’s great that here we have a conservation story that has a really positive message. Clearly, there are still challenges to address but this research illustrates nature’s remarkable ability to adapt to environmental change.”