Stable population trends are a prerequisite for species’ range expansion, according to new research led by scientists at the University of York. 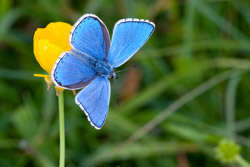 The climate in Britain has warmed over the last four decades, and many species, including butterflies, have shifted their distributions northwards. The extent of distribution changes has varied greatly among species, however, with some showing rapid expansion and others showing none at all. But this variation can be explained by taking into account the abundance trends of species.

The study by researchers in Department of Biology at York, Butterfly Conservation and the Natural Environment Research Council (NERC) Centre for Ecology and Hydrology showed that butterflies were able to expand their distributions only if they had stable (or increasing) abundance trends. It is published by Nature Climate Change.

For those species with stable or increasing population trends that have been expanding their distributions, the amount of suitable habitat available in the landscape is important. The more habitat that is available, the faster a species can expand its distribution area.

Using data on butterfly distributions and abundances, collected by members of the public since the 1970s through ‘citizen science’ schemes, Louise Mair, a PhD student in Biology at York, and her colleagues examined factors limiting butterfly range expansion. These data reveal that species that were previously restricted to southern England are colonising northern England and Scotland. Butterflies have extended their distributions in this way because warmer climates have made northern regions increasingly more hospitable for these temperature-constrained insects.

The study concludes that conservation management must consider existing populations and ensure that species abundances are stable or increasing in order for them to be able to respond to climate change. Increasing the amount of natural habitat in the landscape is an important conservation goal, which should increase the rate of distribution expansion for species with stable or increasing populations. However, habitat creation will not be effective for promoting range expansion by species whose populations are declining.

Population trends can be affected by many things, including local environment conditions, and in recent decades most British butterflies have undergone population declines. More effort is needed to boost abundances within species’ current ranges in order to protect wildlife as the climate and landscape changes.

Louise Mair says: “My previous research revealed huge variation among butterflies in relation to their range expansion rates.  It’s now clear from our new research that much of this variation can be accounted for once species’ population trends are known.”

Professor Jane Hill at York says: “Increasing habitat availability in the landscape has been suggested as a way to help species respond to climate change, but our research shows this will only be effective for species whose abundances are stable or increasing.”

Dr Richard Fox at Butterfly Conservation says:  “We are grateful to the thousands of volunteer recorders who have collected these butterfly data over the past years. Their efforts and the information they’ve gathered are proving crucial to our understanding of the impacts of climate change on British butterflies. These latest research findings have important implications for our work to conserve threatened butterflies.”

Dr Marc Botham, at the Centre for Ecology and Hydrology, says: “Our research highlights the importance of the long-running UK Butterfly Monitoring Scheme for developing effective conservation measures for British butterflies.”

Chris Thomas, Professor of Conservation Biology at York, adds: “Conservation management to increase species’ abundances within their ranges is a vital step in the process of helping species respond to climate changes.”