New prostate cancer drugs may not be targeting root cause of disease, York scientists warn

New drugs being developed for the treatment of prostate cancer may not be targeting the root cause of the disease, according to research published today (Friday, 24 January 2014) in Cell Death & Differentiation.

Scientists at the University of York have discovered that a process called ‘methylation’, previously thought to drive the development of cancer, occurs in cells that are already cancerous. The findings mean therapies aimed at reversing this process might not be effective against cancer stem cells, allowing the cancer to return.

The work, carried out by Dr Davide Pellacani, a member of Professor Norman Maitland’s team at the YCR Cancer Research Unit at the University’s Department of Biology, and funded by Yorkshire Cancer Research and the Grand Masonic Charity, reveals a major difference between the cells normally treated in cancer and the underlying ‘stem’ cells.

Dr Pellacani said: “To develop cancer, certain proteins found in healthy cells need to be switched off. Sometimes this is caused by methylation - a process where DNA is changed to block instructions for making a specific protein. 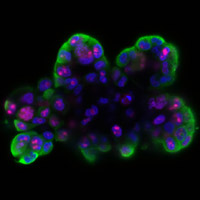 Prostate cancer is made up of two types of cell; rare basal cells, including stem cells, from which the tumour is formed, and luminal cells, which form the tumour mass.

The team found that a change from basal to luminal cells – a process called differentiation – is strongly linked to the methylation difference, suggesting that the methylation in prostate cancer cells is not the primary driving force for the cancer.

Dr Pellacani continued: “There are clear implications for the effectiveness of new drugs currently being developed to change the methylation pattern in cancers. At the moment we only treat a proportion of the cells. By breaking the cancer down into its component cell types, we get insights into why cancers come back after treatment.  Only by treating all the cells in a cancer will we approach long term treatment or even cure.”

Professor Maitland and his team at the YCR Cancer Research Unit achieved international recognition in 2005 when they were the first to identify prostate cancer stem cells, which are believed to be the ‘root cause’ of prostate cancer. The team, now supported by a £2.15m award from Yorkshire Cancer Research, has since explored the exact molecular properties that allow these cells to spread, survive and resist aggressive treatments such as radiation and chemotherapy.