Two weeks in Rome: Lowrie and a ‘mountain’ of pottery

Lowrie Robertson, a third year Archaeology student at the University of York, spent part of the summer vacation helping to uncover the secrets of Roman commerce at Monte Testaccio in Rome. 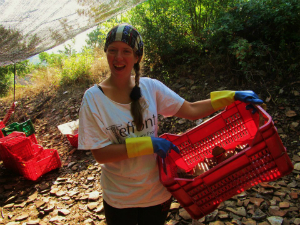 One of the world's largest archives of ancient Roman commerce, Monte Testaccio is an artificial mound 135 feet high created by centuries of discarded amphorae – many of which still bear markings detailing contents and export information.

Lowrie, from London, joined an ArchaeoSpain team led by the University of Barcelona including archaeology students and volunteers from the United States, the UK, Germany, and Australia. Over two weeks the crew catalogued thousands of pottery shards searching for clues about products that the ancient Romans imported into the city.

"The Monte Testaccio Project was an unparalleled opportunity to understand how archaeology is practised in other countries. To find amphorae shards with their creator's original writing still visible after two millennia of being buried, was a phenomenal experience,” she said.

“I really enjoyed seeing how behind each piece was a part of the history of not only Rome, but Rome's relationships with its provinces as far away as North Africa. Working with students from the University of Barcelona not only gave me a colourful education in Catalan history and vocabulary, but was a great way of making new international friends, all of whom I am still in contact with."

ArchaeoSpain director Mike Elkin added: “Lowrie and her co-workers have learned not only about Roman trade, but how archaeologists take the evidence we uncover and turn it into a scientific narrative of how things worked 2,000 years ago. Over the past few years, our international crews have uncovered priceless information about Rome’s past.”

A group of educators and archaeologists created ArchaeoSpain in 2001 to provide opportunities to learn and practice archaeology with trained specialists. Since ArchaeoSpain’s creation, 480 people from 17 countries and 193 universities have joined its programmes.

In recent years, ArchaeoSpain has assisted in major discoveries at various sites in Spain and Italy. In Burgos, it has excavated the Roman theater of Clunia, the largest of its kind in Iberia. In Valladolid, teams are excavating the necropolis of Pintia, an Iron Age burial site that has revealed important clues about warrior classes from the 5th century B.C.

In Pollentia on Mallorca, the high-school group – one of the few archaeological programmes for high school students in the world – has uncovered sections of the city’s Roman Forum, while elsewhere on Majorca, teams are  excavating a Byzantine settlement dating to the 6th century in Son Peretó.