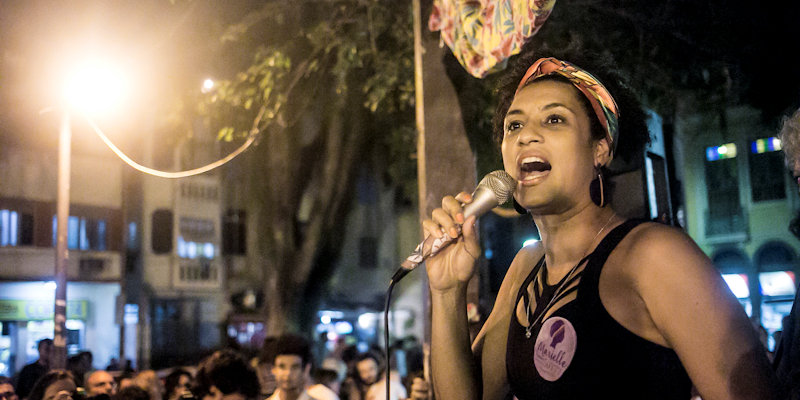 Brazil is possibly the most dangerous country for human rights defenders (HRDs) in the world.  Recently HRDs in Rio suffered the greatest loss they could collectively suffer, when a close friend to many of them, Councilwoman Marielle Franco, was cruelly murdered in an ambush in the centre of the country's second largest city on 14 March 2018. Over 500 days ago, her friends and colleagues asked who ordered Marielle killed and they still have no answer. Meanwhile, in 2018, there were candidates elected to the state parliament, whose campaigns denied the importance of defending and guaranteeing human rights, blaming HRDs for increased urban violence.

Rio de Janeiro faces one of the worst-case scenarios, with violent administrations at the three levels of government, imposing customs standards while putting in place a systematic policy of violations of rights, endangering already low levels of democracy in the state, and with blatant increase in inequality.

Speaking about the deaths of six young blacks in five days of police operations in Rio's favelas, in a clear attempt to criminalize human rights defenders, the state governor said that the responsibility for the killings lies with the allegations made by human rights defenders. Continuing to denounce this and helping families is undoubtedly an act of resistance to barbarism in the country.

Laíze Benevides is a human rights lawyer and popular educator working in Rio de Janeiro. She has a Master’s degree in Constitutional Law and is in the process of completing her PhD. During her time at university, she worked alongside the Landless Worker’s Movement (MST) where she conceived the Popular Advisory for Camping Women. From 2013-16 she worked as the Communication and Popular Education Coordinator at the Human Rights Defense Institute (DDH), where she coordinated the Popular Course on Human Rights. She represented DDH on the Torture Prevention and Engagement State Committee. In 2017-18, she was part of the Human Rights Advisory of State Deputy Marcelo Freixo, working with the Citizenship and Human Rights Committee of Rio de Janeiro Legislative House. Most recently, she has followed the legal statements on the inquiry that investigates the murder of councilwoman Marielle Franco.