Transnational approaches to the French Wars of Religion 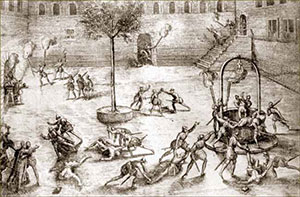 Dr Eric Durot, from the Department of History at the University of York, organised an international conference entitled 'Transnational Approaches to the French Wars of Religion'. It was held at the King’s Manor, York, on 6 and 7 July 2018 and was supported by a Marie Skłodowska-Curie Actions grant (European Union).

The conference brought together historians working on transnational dimensions of the French Wars of Religion in the second half of the 16th century. This approach has long been overshadowed by national and local approaches. The conference papers, however, highlighted that feelings of belonging, the circulation of men and ideas, international networks, and the rise of the notion of contemporaneity at the time all interacted with local and national contexts. For example, the start of the wars in 1560 was directly connected to the politico-religious revolt in Scotland in 1559-60.

The Conference amply demonstrated that new understandings about the nature of the Wars can be achieved by focusing on cross-border dynamics, transnational synergy and identity, international issues, and also on contemporaries’ awareness that the Wars were not just a Franco-French conflict. There are plans to publish a selection of papers presented.

Find out more about Dr Eric Durot and his work.

See what History courses the Univeristy of York are offering.