The Mystery of the Escrick Ring

Leading experts to gather in York to try and solve the mysteries of a unique sapphire ring. 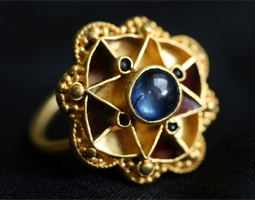 The ring, which is the second earliest example of the use of sapphire ever found in the country, has baffled archaeology experts because nothing has ever been found like it before. Its intricate design was made by a highly skilled craftsman for an extremely wealthy and powerful person.

But its style and material makes it hard to date – meaning it can’t be placed in any historical context which would give clues to its origins or possible owners.

Experts from some of the UK’s top universities and leading museums will be attending the event on January 25, organised by the University and the Yorkshire Museum, in a bid to solve some of the ring’s mysteries.  The maker of a replica of the ring from the Little Diamond Shop, on Lendal in York, will also attend to share his knowledge on the skills used to remake it and how this might compare to the original craftsmen.

, a Professor of Early Medieval History in the Department of History, said: "The early medieval gold and sapphire ring found at Escrick is a discovery of major national importance. It's an extraordinary and intriguing piece and the forthcoming workshop will be a very exciting event which, we hope, will shed light on the origin and manufacture of the ring."

Natalie McCaul, curator of archaeology at the Yorkshire Museum, and where the ring is on public display, said: “This beautiful ring has really got us puzzled. Nothing like it has ever been found before which means it is incredibly difficult for us to date it and therefore build up a picture around it.

“To try and get a better understanding we have invited leading experts from across the country to come and see the ring up close and share their thoughts. It is a rare chance to get such a distinguished group together and we hope it will help us shed new light on the ring which may reveal some of its secrets.”

The nationally important gold ring was found by metal detectorist Michael Greenhorn, from York and District Metal Detecting Club, in 2009. It measures around 2.5cm across and is intricately made of gold, prestige glass and a large sapphire. This is the second known use of a sapphire in jewellery found in the country, the first being a 5th Century Roman example.