Helen Geake has worked for the Portable Antiquities Scheme since 2000. The Scheme records archaeological finds made by members of the public, on a publicly accessible internet database. It was set up to encourage stray finds to be reported as part of the Treasure Act 1996, but has developed into a dataset of eroded sites and accidental losses which are hard to capture by traditional archaeological means.

Helen first encountered the Department when she joined the York excavation at Sutton Hoo in her first vacation as an undergraduate at UCL, subsequently moving to York as a doctoral student.

From 2001 to 2010 Helen also worked as a presenter for Channel 4’s Time Team, and has since gone on to do more freelance work including ITV’s Britain’s Secret Treasures. Both strands of her work connect archaeological research with public understanding of its importance, interest and value. 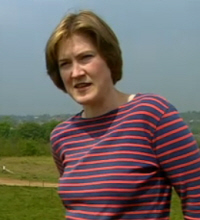