What is natural is beautiful. This belief underpins the United Kingdom's policy on National Parks, with National Parks explicitly committed to preserving and enhancing the UK's 'natural beauty'. But what is 'natural'? And what is 'beautiful'?, PhD student Jonathan Gordon asks.

In a conversation at the Leverhulme Centre for Anthropocene Biodiversity this week, a colleague mentioned that whilst they previously perceived the UK’s National Parks to be beautiful, once they learned of the extent of the National Park’s modification by humans over many millennia, that sense of beauty and awe receded, and in its place was filled with sadness at the state of our current ecosystems. This viewpoint is shared by many and there is now a growing movement to ‘rewild’ our National Parks.

The chalk grasslands of the South Downs National Park, England, are a haven for rare species, boasting 40 species of flora and fauna in a single square metre, and provide a range of well-being benefits for those who visit. Last year, the South Downs National Park Authority embarked on a campaign to raise £100 million to ‘renature’ the Downs, with the overarching aim to manage 33% of the landscape for nature by 2030. A significant conservation focus is on protecting and expanding the rare, species-rich chalk grasslands, alongside a range of other initiatives that include conserving specific pockets of native woodland, bringing heathland/scrub into ‘good’ management and reintroducing beavers. Andrew Lee, Director of Countryside and Policy for the South Downs National Park Authority, aims to make the Downs more ‘natural’, reflecting views held by many of those in favour of ‘rewilding’ and ‘renaturing’ to return landscapes to how they were (whether real, or imagined) at some point in the past, before humans messed them up.

Implicit to this is the belief that human-modified environments are ‘unnatural’ and worse than ‘pristine’ landscapes unmodified by humans, yet palaeoecological studies (research investigating the ecologies of the past) from the South Downs National Park show that before around 6000 years ago, the now species-rich chalk grasslands were almost entirely blanketed in relatively less rich closed woodland. Beginning in earnest around 6000 years ago, the woodland was felled by early farming communities (as it was across the majority of northern Europe) and the land grazed by sheep, leaving in its place what we recognise today as the chalk grasslands of the South Downs National Park. These much-loved chalk grasslands, the object of desire for those wishing to ‘renature’ the area, are heavily human-engineered environments, despite their common appreciation as ‘wild’ places sheltered from the human hand.

Not only this, many of the proposed conservation measures, such as the reintroduction of beavers and the management of scrubland and heath, also require continuous, significant human effort to maintain. For example, given the absence of large carnivores (wolves, bears) from English shores, beavers now lack any meaningful natural predators and would require culling to prevent overpopulation. Would the reintroduction of a globally non-endangered species that necessitates the culling of large quantities of individuals lead to what could be described as a well-functioning, sustainable, ‘natural’ ecosystem? 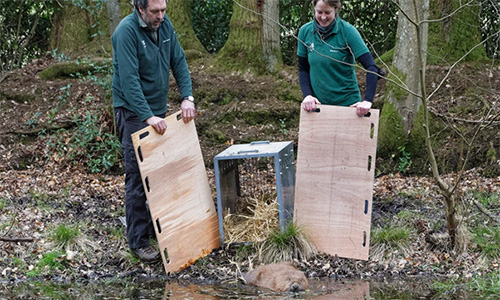 If the desire of the National Park Authority is to ‘renature’ the Downs, will they be returning the landscape to an environment largely dominated by trees, coupled with a hands-off approach to management? The commitment to the proliferation of chalk grassland environments (and to other desired outcomes) issues a resounding “no'' to this question. Instead will ‘renaturing’ efforts embark on an endless crusade to remove all species deemed to be ‘invasive’ (species previously somewhere else), potentially limiting future diversification and hampering our resilience to the changing climates of the future? Will we continue to reintroduce locally extinct, but globally populous species like the Eurasian beaver? Will we choose to continuously heavily manage heath and scrubland? If this course of action is chosen, it does indeed leave room for nature, but arguably a short-term version of nature that is manicured and maintained to contain all the things we do want (beavers), and none of the things we don’t (species from other places).

If consulted, would the wider public’s opinion on the South Downs National Park’s ‘renaturing’ approach change if they learned the true nature of the current landscape’s genesis? Perhaps. Perhaps not. Perhaps people just like the idea of having beavers (and wolves, and bison, and lynx - but certainly not the endangered Iberian version, thank you) around, and ‘renaturing’ is a nice justification.