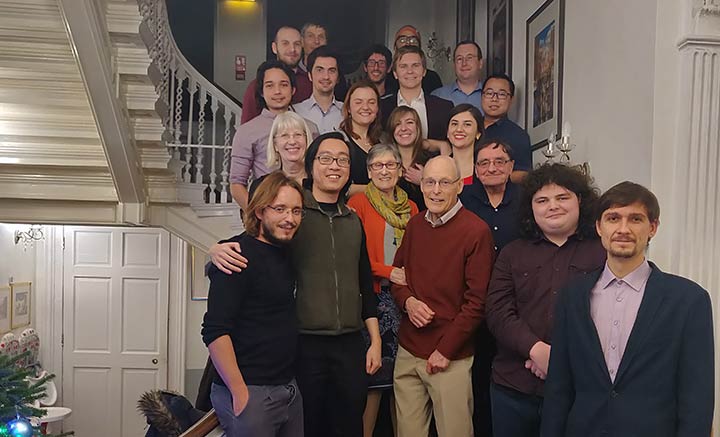 The York computational magnetism group is at the forefront of the development of theoretical and computational approaches to the properties of magnetic ‌materials and their applications, which include magnetic recording and an expanding interest in biomagnetism.

I joined the group in 2004 as a PhD student and have been a post doc with the group since 2008. I am the author of 31 peer-reviewed articles in international journals with over 400 citations and have a h-index of 10. I am lead developer and maintainer of the VAMPIRE software package, and developed the Constrained Monte Carlo algorithm for determination of temperature dependent anisotropies and energy barriers in magnetic systems. Web siteContact: P/A/023  Ext: 2822

Administrator for the group:

I have two part time jobs - administrator for the Computational Magnetism group and PA to the Director of Commercial Services.

Background:   I have previously worked as a temporary PA in External Relations and in HR at the University.

The aim of my project is to develop and apply general methods for investigating the interactions effects in magnetic nanoparticle systems. For this I will focus on two applications:cmagnetic recording media and magnetic hyperthermia.

My first contact with the Computational Magnetism group was through an Erasmus internship during my undergraduate degree at the "Alexandru Ioan Cuza" University of Iasi. The project at that time was concerned with the stability of magnetic skyrmions in thin films and the implementation of a more accurate method to describe the topological charge of the chiral magnets.

In October 2019 I rejoined the group, this time as an MRes. student. My project aims at developing a fast and reliable way of finding energy barriers for nano-sized magnetic systems (e.g. spin chains, grains, exchange spring systems) using the Lagrangian multiplier formalism. Such a study could help predicting the stability of stored data in magnetic recording media under the influence of thermal excitations. Moreover, the proposed approach has the potential of greatly reducing the computational effort in comparison with the Nudged Elastic Band method or the robust dynamic way.

Sarah joined the group in 2014 whilst doing a summer internship‌‌ and is now a PhD student. H
‌er work on models of exchange bias in FeCo/IrMn bilayers, supervised by ‌‌Richard Evans and Roy Chantrell, produced important results including the observation that exchange bias only naturally arises in the case of disordered IrMn. Exchange bias is an important phenomenon and very poorly understood.

I first joined the group as an Erasmus student during the Summer of 2015. My project consisting of studying thermal decay of magnetic recording media.

After finalizing my BSc degree at "A. I. Cuza" University, Iasi, Romania, I rejoined the group as an Msc by research student, focusing my research on modelling FeRh and higher-order exchange interactions.

Since 2017 I have been undertaking PhD studies within the group. My current research interests are: modelling spin-lattice dynamics, damping calculations for FePt HAMR systems via FMR techniques, switching in FePt granular systems, ultrafast switching in FeRh systems and skyrmions nucleation and stability.

I returned to the group for my MPhys project, which consisted of the development of a novel model accounting for both Brownian and Neel dynamics of magnetic nanoparticles bound within a fluid medium for application in magnetic hyperthermia.I first joined the group in the summer of 2015 as a summer student via the EPSRC vacation bursary scheme.  My work at the time consisted of using a Kinetic Monte Carlo model developed by the group.  I used this model to study the underlying physics of the heating mechanisms within magnetic hyperthermia, specifically investigating the breakdown of the extensively used approach based on linear response theory.

I am currently undertaking my PhD within the group, working on a continuation of my study of Brownian and Neel rotation mechanisms, whilst also researching domain widths and their impact on the lifespan of data stored using magnetic recording media.

Daniel joined the group in September 2016 to begin his MSc by Research.  ‌

The project is based on understanding the magnetic properties of permalloy.  Specifically, looking at a cylinder of permalloy of around 100nm diameter which exhibits a spin vortex structure.

Using Vampire, Daniel is learning more about the formation of the vortex, the sizes and temperatures that allow the material to reach this stable state, as well as the demagnetisation properties of permalloy itself.

I joined the group for my final year MPhys project in 2016. My research focused on using our VAMPIRE software package to model multiferroic materials, an exciting area of international study.

I am now progressing in the group as a PhD student attached to the FEMTOTERABYTE project, where I will be studying the ultrafast dynamics of magnetic materials as part of an EU push to develop ultrafast and ultradense magnetic storage devices. 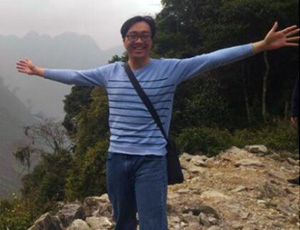 2014-2016: MSc Nanomechanics and Electronics, the University of Sheffield, UK

I joined the group in 2018 as a PhD student from Vietnam. My research focuses on the development of a physical model to account for the role of the finite-size and surface effects on magnetic and of magnetic nanograins for possible applications to heat-assisted magnetic recording (HAMR). I have been working extensively on Iron Platinum in L10 phase and have discovered a mechanism governing the dependence of the Curie temperature distribution of L10-FePt on finite-size effects. We are now extending the model to describe the effects of surface disorder on the static and dynamic properties of not only L10-FePt but any generic ferromagnetic material.

Publications: I joined the Computational Magnetism Group in York in April 2018. My main research is using the atomistic/micromagnetic model to study the magnetism dynamics. And my research interests are skyrmion dynamics, skyrmion based device and spintronic neuron device.‌

I joined the group as an undergrad in 2009 and have since completed a BSc and MSc.  I am currently working on a PhD project, which aims to better understand the Heat Assisted Magnetic Recording (HAMR) process and deliver a working model capable of reproducing the relevant physics. This will enable further study of HAMR, both by myself and other interested parties.

In order to model more realistic structure of F/AF layers in read elements with irregular shapes, the Voronoi construction is employed to generate a series of microstructures with specified grain size and grain size distribution of both layers as schematic illustration. The granular model is used to investigate the thermal instability of the AF layer with the atomistic parameters.

Schematic illustration of the advanced granular recording media with multi-layers in order to increase the uniaxial anisotropy and enhance high areal density. 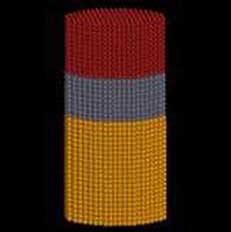 I am currently doing my PhD in Santiago de Compostela, in Galicia, Spain.‌

I have been visiting the group for several months in 2016/2017 thanks to two Galician pre-doctoral grants, one from “Fundación Barrié” (private institution) and the other from “Xunta de Galicia” (regional government).

The projects were focused on studying dissipated heat at a particle level in the frame of magnetic nanoparticle hyperthermia. Both groups from Santiago and York will continue to collaborate and develop further research on the aforementioned topic due to the awarded Royal Society project “Magnanotherm” 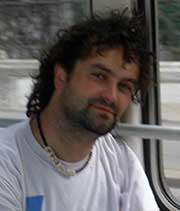 I‌ am visiting Prof. Chantrell's group with the support of the Xunta de Galicia (Regional government, Spain), under the 12C postdoctoral plan.  My 3 year funded project aims to develop an integrated modeling/theoretical framework for the so called magnetic-hyperthermia, a promising cancer treatment technique.  The final goal is to create a general modeling tool including possibilities not existing in the same framework up to now, which are limiting the success of in-clinic magnetic hyperthermia.  Novel aspects include the development of accute aggregation models and the influence of self heating. 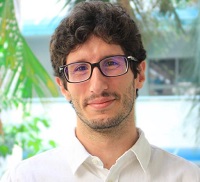 I am a PostDoc researcher at Mahasarakham University in Thailand in the Computational and Experimental Magnetism Group led by Assoc. Prof. Dr. Phanwadee Chureemart and Assist. Prof. Dr. Jesseda Chureemart. My project mainly focuses on the development of advanced computational approaches to model and investigate the properties of a novel magnetic recording technology called heat assisted recording (HAMR). HAMR relies on an intense heat pulse to write the information and it is important to understand how the properties of the heat profile affect the writing mechanism. To this end we have developed a multiscale approach that combines atomistic and micromagnetic simulations which can support the development of HAMR media. This project is developed in collaboration with the University of York, with which I continue to keep in touch.
I joined the Computational Magnetism Group at the University of York in 2014 as a PhD student under the supervision of Prof. Roy Chantrell and Dr. Richard Evans, from which I graduated in July 2019. During my PhD I mainly worked on the investigation and characterisation of the magnetic properties of magnetic random access memory (MRAM) devices using an atomistic spin model. MRAMs, in particular spin-transfer torque (STT) MRAMs, are new real candidates to replace the current memory devices providing lower power consumption and higher efficiency, hence a full characterisation and optimisation of this technology becomes of primary importance and relevance.

I obtained a Bachelor (2009-2012) and Master (2012-2014) degree in Physics at Università degli studi di Milano Bicocca (Milan,Italy) with the thesis “First principles simulations of structural and electronic transport properties in defective silicene” under the supervision of Dr. Mario Italo Trioni.

I joined the group in 2008 as a PhD student and have been collaborated with the group to develop the advanced reader model for Seagate since completing PhD in 2013. In addition, I am working with the group to investigate the properties of materials and spin transport for MRAM devices which is financially supported by Samsung Semiconductor division. Schematic illustration of the values of spin torque coefficients as a function of position across the DW for materials (Fe, Co and FePt): Distances are scaled by the DW width. The result shows that the magnitude of these coefficients strongly depends on the spatial variation of the magnetisation gradient giving rise to nonuniform behavior throughout the layer.

•2012-present PhD of theoretical Physics, Tongji University, China
I joined the Computational Magnetism group in January 2016 on a 14-months governmental granted project: Computational models of ultrafast laser induced magnetisation dynamics.
My visit here aims to better understand the Heat Assisted Magnetic Recording (HAMR) process which will enable further study of HAMR.  Our current work is to study the energy transfer between different species by tracking the effective spin temperature, to gain an insight of an “opposite” transient ferromagnetic-like state.

I am currently a PhD student at Mahasarakham University, Thailand.  I have been visiting the group for six months from July to December 2017.  I am supported by the Industry Academia Partnership Programme, IAPP and supervised by Phanwadee Chureemart and Jessada Chureemart.  I'm investigating the stability, thermal effect and noise characteristic on read elements by using atomistic model coupled with spin transport model.

My work is focused on the development of advanced reader model to better understand the parametric study on exchange bias effect with the thermal stabilities and the magnetisation dynamics in a whole reader stack using MARS which is the realistic micromagnetic model developed by Dr Lewis Atkinson.I joined the compuational magentism group as an intern student from July to December 2017, supported by IAPP funding. I am now a PhD student from the Physics department, Mahasarakham University, Thailand.  I am working under the supervision of Asst. Prof. Dr. Jessada Chureemart and Asst. Prof. Dr. Phanwadee Chureemart.