A former researcher at the University of York’s Borthwick Institute for Archives has written a new book on the life of JB Morrell - the first detailed study of one of the most important figures of 20th Century York. 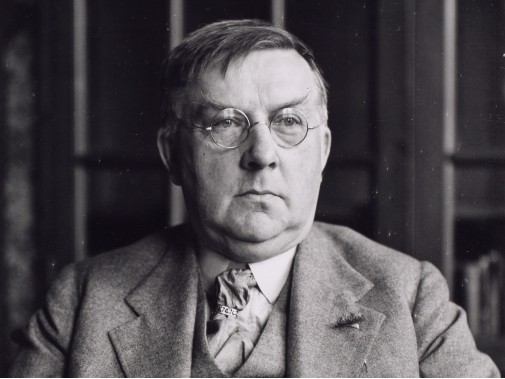 The book City of Our Dreams. J. B. Morrell and the shaping of Modern York was written by Katherine Webb, a former archivist at the Borthwick.

The book details the extraordinary impact John Bowes Morrell (1873-1963) businessman, civic leader, historian and visionary had on the city, and how his astonishing legacy and achievements fundamentally shaped the city we know today.

Author Katherine Webb said: “The story of his life and legacy is the story of the creation and reinvention of modern York, not just as a historic place but also as today’s vibrant living community.

“For well over half a century J. B. Morrell was at the centre of all major local developments.”

An extraordinarily busy man, Morrell had two parallel business careers. As finance director of Rowntree & Co., he was one of the key figures in the development of the firm. He was also a director of numerous Liberal and regional newspaper companies, ultimately becoming chairman of Westminster Press.

He brought this considerable business experience to a third area of activity, in York’s municipal government. First elected to York City Council in 1905, as a one of a group of young ‘Liberal Progressives’, he played a huge role in York civic life over a forty-year period, as councillor, alderman, chairman of the finance committee (York’s “chancellor of the exchequer”) and twice lord mayor.

He oversaw the transformations of the York Public Library and of the City Art Gallery and he had a key role in the restoration of the historic Shambles. He was the originator, and main driver, of the long and difficult project which culminated in the opening of the pioneering and acclaimed Castle Museum in 1938. In the 1940s he was centrally involved in the post war planning of the city.

Morrell loved York and he championed the preservation of York’s historic heritage; for over half a century he was a central figure among those who sought to protect and guard York’s architectural treasures. He emulated his brother Cuthbert in buying and restoring crumbling York buildings and he originated what later became York Conservation Trust, which today owns and cares for a large number of York’s important historic buildings.

In 1940 he outlined his personal vision of the future of York in his short but influential work The City of our Dreams, in which he stressed the importance of balancing the legacy of the past, with the needs of the present and the duty to the future.

In 1946 Morrell was one of the four co-founders of York Civic Trust, of which he became the first chairman. The objectives of the Trust - for the betterment of the city and the protection of its treasures - represented a new guardianship of Morrell’s ideas and vision.

Morrell remained an active figure right up to his death, aged 90. A great benefactor to his beloved city, he was universally regarded, and with much affection, as one of its greatest citizens. In his later years, he was centrally involved with the long campaign for what was his greatest dream - a university - and his contribution was crucial and important. When the University of York opened in 1963 – its library named after him - it represented the culmination of his ambitions for York’s future.

Gary Brannan Keeper of Archives and Special Collections at the Borthwick added: “This meticulously researched and lucidly written book is a major contribution to the history of York and of the development and shaping of a historic city.”

The book is available to order online