Spotlight: Old Norse brings us back to our Viking roots

Old Norse has been brought back to life by a team of PhD students at the University of York through the voices of new animatronic Viking characters at the world-famous JORVIK Viking Centre.

Nik Gunn, Katherine Rich and Timothy Rowbotham, from the Department of English and Related Literature, and Harriet Evans, from the Centre for Medieval Studies, provided the voices of the characters and Nik also trained members of staff at the Centre in how to speak basic phrases in Old Norse and Anglo Saxon to help engage visitors with the ancestor of modern Scandinavian languages.

The team write here about why it is important to remind people of their linguistic past: 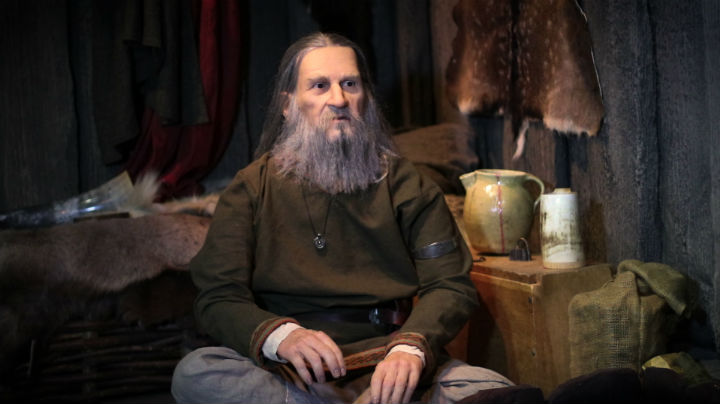 “[And in the days of King Beorhtric] the first three ships of Northmen came and the reeve rode to them and wanted to direct them to the King’s town, for he did not know who they were, but they slew him. Those were the first ships of Danish men which sought the land of the English people.”

"In typically laconic style the Anglo-Saxon Chronicle entry for the year 787announces the abrupt, bloody emergence of the Vikings onto the pages of English history. The term the Chronicler uses to describe them - the word denisc - is often translated as ‘Danish’, but in Old English this word applied to all the peoples of Scandinavia who spoke the language known today as Old Norse.

Over a period of three hundred years, Old Norse speakers raided, traded, and settled in the British Isles, leaving a lasting impact on the English language. Many common words we use today - they, sky, anger, happy, knife - were taken from the Old Norse speakers who made their lives in the area known as the Danelaw, that arc of land stretching from Cumbria, down through Yorkshire and the East Midlands, and into East Anglia.

Evidence of Scandinavian settlers, and the language they brought with them, may also be seen in many place-names in these regions: the common element -by in places like Whitby and Corby, for example, is derived from the Old Norse word for a farm. York itself is the modern incarnation of the Viking name Jórvík, which was a ‘Scandinavianized’ form of the Anglo-Saxon name for the town, Eoforwīc. Many of York’s streets, such as Micklegate and Stonegate, also display Norse influence through the presence of the word gata, meaning “street.”

Old Norse is an interesting and important part of our own linguistic history, but by reading the language we also gain access to a wealth of unique and exciting medieval literature. After Iceland converted to Christianity, around the year 1000, Icelandic writers copied and composed texts in the Latin language of the Church, but soon adapted the Roman alphabet to write down the vernacular language that they spoke, recording and producing poetry and sagas that are still enjoyed today.

Perhaps the most well-known and well-loved literature of medieval Iceland are the Íslendingasǫgur, or Sagas of Icelanders, which tell of the families that settled in Iceland in the ninth, tenth, and eleventh centuries. Theses sagas provided thirteenth-century Icelanders with their own local and family histories, but also explore the human condition through their compelling stories of blood-feud, outlawry, and love affairs. 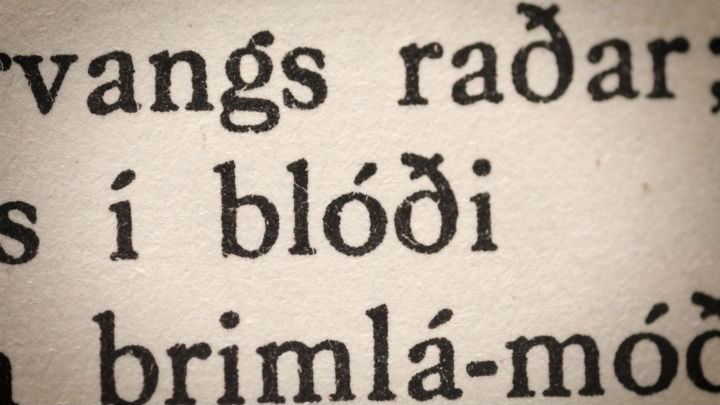 The timeless quality of these narratives means that Old Norse literature has been a rich source of inspiration for modern authors and artists. J.R.R. Tolkien was a philological scholar by trade, and his deep love of Old Norse and Anglo-Saxon literature informed his literary endeavours: the names of Gandalf and the dwarves from The Hobbit (1937), for example, are all taken directly from the mythological creation poem Vǫluspá.

As well as informing the blockbuster pop-culture of Marvel’s Thor or the video game Skyrim, Old Norse literature has been used to more critical ends. Seamus Heaney’s poetry collection North (1975) drew parallels between the feuding saga societies of Viking Age Iceland and the tensions of his native Ulster.

More recently, Neil Gaiman’s fantastical road-trip, American Gods (2001), or the sparkling prose-poetry of A.S. Byatt’s Ragnarok (2011), utilise Norse myth to comment on the tectonic environmental and social changes sweeping the modern world. Old Norse language itself has even found its way into the mainstream, with the glossy TV-drama Vikings making a welcome effort to incorporate original languages into its dialogue during moments of tension at the meeting of different cultures.

The sound of spoken medieval languages, including Old Norse, can help to give an immersive feel to popular depictions of the past, but it is not only in fictional works that we encounter the sounds of the Viking Age. Audio experiences, informed by leading scholars and the latest research, are now becoming a part of the way that we represent the past in museums and galleries, and spoken Old Norse has been used both in the Jorvik Viking Centre, with its Old Norse-speaking animatronic figures introduced in 2010, and the British Museum (2014) Vikings: life and legend exhibition.

Use of the spoken word in exhibitions, and in particular, use of conversational recordings, confronts the visitor with the spoken languages of the past. As opposed to soundtracks of crackling fires, or birdsong that are sometimes used to create immersive exhibitions, use of spoken language encourages visitors to consider the interactive nature of everyday life in the past. Such recordings play a key role in presenting a more holistic view of the past as a living, breathing place: a place in which people had ordinary conversations, and sounded not so different from how we sound today."

The JORVIK Viking Centre is open the public daily from the 8th April 2017.