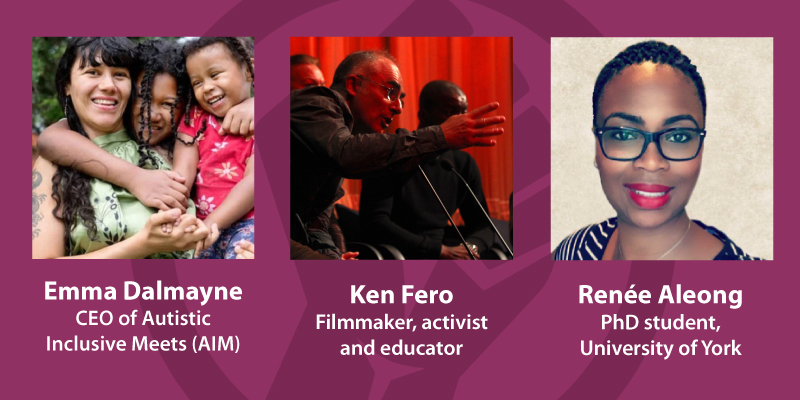 State violence and incarceration in the UK: Intersections of race, disability and mental health

Black and ethnic minority people with disabled, Autistic and mental health identities are often caught at the intersection of structural violence, racism and ableism in the UK. Research shows that people with these identities are more likely to be denied access to services, detained and suffer from state violence in the UK - not only by Police but also in the mental health system, the care system, the immigration system and in the criminal justice system.

Inspired by the ongoing case of Osime Brown and others who have been incarcerated or suffered state violence due to the interface between these oppressions, this event aims to highlight issues, key cases and think about how they can be addressed.

The Anti-Racism Working Group will be joined by three speakers:

Emma is an autistic mother to two autistic children, the youngest of whom she home educates. She campaigns strongly for autistic rights and fights to stop autistic mistreatment, having worked with the police, the BBC and other prominent media. She has a strong belief in acceptance and inclusion. Emma is involved in the campaign to free Osime Brown, which has reached over 300,000 signatures and wide media attention.

Ken is a founding member of Migrant Media which has produced a number of hard-hitting documentaries examining community responses to issues of racism and resistance. This includes Sweet France (52 minutes 1992) - winner of both a Mentione Speciale at the Images du Monde Arabe, Paris, and the Milano Province Prize 5th Festival of African Cinema - and the compelling Justice for Joy (52 minutes 1995). He has used film to campaign on issues of policing and human rights abuses in Europe, and the resistance to this. He also directed and produced the radical and controversial cinema documentary Injustice (98 minutes 2001) which won many awards including Best Documentary - BFM London Film Festival 2002 and Best Documentary (Human Rights) One World Film Festival 2003. His current feature film Ultraviolence (2020) was officially selected in the BFI London Film Festival for its World Premier to critical acclaim.

Renée is a PhD student in the Department of Social Policy and Social Work at the University of York. Her PhD research explores the compulsory detention of Black service users under the Mental Health Act 1983. She gained extensive experience of working within the Ministry of Justice and the Nursery and Midwifery Council prior to undertaking her BA in Social Work and MA in Social Research. She is now in the 2nd year of her PhD, which is funded by an Economic and Social Research Council scholarship. Read Renée’s blog entry on making Black mental health matter here.

Attendees are also invited to take part in a Q&A. Questions for the speakers can be submitted before the event via email to the Anti-racism Working Group or during the event via the Q&A function.

The webinar will be held via Zoom with closed captioning enabled. For other accessibility requests please contact the organisers.

About the Anti-Racism Working Group

The Anti-Racism Working Group (ARWG) was co-founded by Melissa Williams, Alicia Easley, and James Lewis with support from Alice Nah from the Centre for Applied Human Rights, Susan Forde and Jeremy Moulton from the Politics Department at the University of York.

The Anti-Racism WG seeks to build a learning community surrounded on Angela Davis's idea that it is "not enough to be non-racist, we must be anti-racist". As a WG we hope to share resources on how to be anti-racist, as well as build a community to have conversations and to ask questions.

The Anti-Racism Working Group also aims to encourage and challenge the University to decolonise its curriculum to make sure Black voices in academia are amplified and to have more BME hires within departments.

The group has regular Zoom drop-ins that are usually held bi-weekly on Thursday at 5pm. All those interested (staff or students) to join the group and share and learn about anti-racist work are very welcome. Link to the ARWG Facebook page.