De-Extinction and the Meta-Mammoth: Reality Made Fiction, and Fiction Made Reality

Sarah Bezan considers the cross-dissemination of artistic and scientific practices and their bearing upon one another.

In the 1984 April Fools’ Day edition of MIT’s Technology Review, science correspondent Diana ben-Aaron reports that Soviet scientists had successfully extracted the nuclei of a woolly mammoth preserved in the Siberian permafrost. Upon receipt of these cells, MIT geneticist Dr. James Creak set to work by mixing them together with the DNA of elephant sperm, in turn “zipping” together sections of elephant and mammoth code. Creak and the Soviet scientists then fused the nuclei from the mammoth ova with sperm from an Asian elephant bull. So emerged, according to ben-Aaron, the creation of the first elephant-mammoth hybrid: a “mammontelephas,” coined from the Russian mammonth (mammoth) and Greek elephas (elephant). It looked like a mammoth, and behaved like a mammoth — but was it a mammoth, or a metaphor? Was it a meta-mammoth? 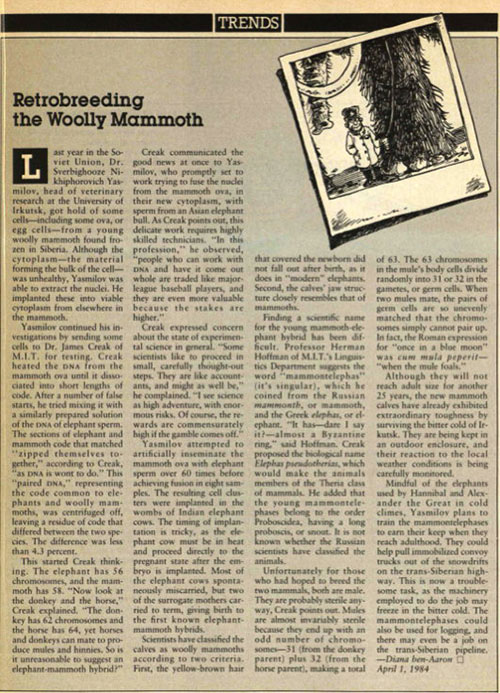 It was, of course, a hoax. The April Fools’ Day article ended on a comedic note, with the author suggesting that the mammontelephas calves would need to “earn their keep” by dislodging frozen vehicles from the snow or even taking up work on the trans-Siberian pipeline. What’s intriguing is that this was not the first hoax to hit American popular audiences. Decades before ben-Aaron published “Retrobreeding the Woolly Mammoth,” a story was widely circulated that members of The Explorers Club — established in 1904 in New York City to facilitate the intellectual exchange of explorers and scientists —  consumed what they believed to be prehistoric mammoth meat at their annual dinner in 1951 (it was, in fact, an entrée created from cuts of Green Sea Turtle).[1] This dinner was promoted by none other than the talent agent of legendary film star Mae West: the iconic actress who brought memorable characters and stories to life both on screen and stage.

These stories demonstrate that when it comes to our contemporary understanding of mammoths, science and spectacle often go hand in hand. Think, for instance, of Michael Crichton’s Jurassic Park and Jurassic World novels and of the exceptionally successful blockbuster film adaptations. Which came first: the science or the spectacle; the dinosaur or the egg? 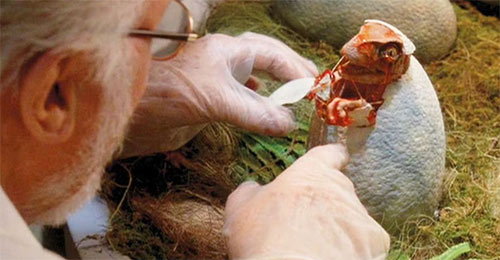 As a literary scholar who engages with creative representations of technoscientific innovations like de-extinction (which comprises a suite of tools including synthetic biology, gene editing, and back-breeding), I consider the cross-dissemination of artistic and scientific practices and their bearing upon one another. To understand this, I have turned to the work of David Jaclin, who makes a case for what he calls the animal-medium. “In biology,” Jaclin writes, “a medium is a substance within which a culture grows,” but “in media theory,” he continues, “a medium is a technology within which a culture grows.”[2] In his interpretation of a  distinctly biocultural medium, Jaclin seeks to examine how technoscientific plans to resurrect the mammoth are swept up in the “fictionalization of reality.”[3] Interpreted this way, the de-extincted mammoths planned in recent years by Big Tech-funded firms like Colossal are effectively creating a metaphor of a mammoth rather than a mammoth itself. This doesn’t mean that future de-extincted mammoths wouldn’t be real. What it means is that their scientific reality is fused with its cultural circulation and fictionalization. The stories we tell about past and future mammoths are playing a part in the mammoths we are making.

The 21st century mammoth is based on an original idea of a mammoth that no longer exists outside of a retroactive evolutionary narrative that has been pieced together by 17th and 18th century naturalists like Georges Cuvier and Hans Sloan, and circulated in endless cartoons, films, novels, and other artistic artifacts in popular culture during the last several centuries in Western societies. Even though mammophants (the name given to future de-extincted mammoths) are created from the DNA of mammoth tissues that have been preserved in the permafrost, these hybrid creatures will be the result of CRISPR gene editing technology that allows for the precise selection of desirable traits of mammoths — such as shaggy hair and resistance to freezing temperatures — that are combined with Asian elephant DNA. It results, to put it more plainly, in the representative appearance of a mammoth: a meta-mammoth.

As I conduct my research on de-extinction candidates like the mammoth, what interests me is how close ben-Aaron’s hoax article comes to the reality of present-day mammoth de-extinction initiatives. Much of the technology (aside from the recent emergence of synthetic biology) has existed for decades, piloted in large part due to advances in cloning technology, notably in the creation of Dolly the Sheep in 1996. Given all that was known about such technologies at the time ben-Aaron composed her hoax article, it’s entirely possible to sketch out the end result of “retrobreeding” a mammoth that bears some similarity to the process scientists are employing today. It’s curious, however, that a fictional sketch of the future seems to have engendered, or at least presaged, its reality.

This reality is one based on a dream. Although George Church is careful to say that he will not be re-enacting Jurassic Park with his resurrected mammophants, he does proclaim to be a “big dreamer.” An investor in the Personal Genome Project declares that Church is “not an incremental thinker…he wants to put a stake out far and figure out how to get there.”[4] These dreams then in turn become reality. But what is this reality ultimately made of? As Jaclin puts it, what we are making is not a mammoth, “but rather the waking dream of a fictionalized animal: a process comprised of concreteness and indetermination, producing a new totem made out of mud, proteins, bits, electricity, embryos, and blank cheques.”[5]

Jaclin’s description of mammoth realities that await us (likely within the next decade) may strike some as disconcerting, particularly if one prescribes to the idea that a Jurassic Park scenario is bound to happen. But the cultural touchstone I am beginning to reach for more and more these days is the biblical story of Noah’s ark. Here in the UK, conservation cryobanking has had a tremendous surge in financial backing and support from natural history museums, zoos and aquaria, conservation charities, and academic institutions. CyroArks, a UK-based network of scientists who are working to “make a step-change in the curation and availability of DNA samples, tissues samples and cell lines from [endangered] animal taxa,” is an organization that seeks to bring order and managerial control to the global biodiversity crisis. The mammoth is perhaps one iteration of what may be a long line of revived species in the future.

If the biodiversity crisis is leading us into cultural imaginaries of the ark (see in particular The Frozen Ark), then it’s worth considering what these fictional futures might entail. French philosopher Jacques Derrida’s classic treatise, Archive Fever: A Freudian Impression (1995), begins with a critique of the semantic roots of “archive,’ or arkhē, which means both commencement and commandment. For Derrida, the archive is deeply tied to political power and to those who wield it. This is true of CryoArks and other cryo-conservation efforts. While de-extinction is not (yet) producing thriving communities of revived species, tissue samples of nonhuman animals on the brink have been rapidly accumulating in frozen storage facilities. I posit that the new natures that lie on the other side of The Frozen Ark offer us an opportunity to imagine different kinds of relationships between human and nonhuman animals that need to be thought outside of the rigid binaries of the “fictional” and the “real.”

While political scientist Amy Lynn Fletcher suggests that frozen embryos of endangered species could be seen to“replace the real and tangible animal with a string of bio-digital code,” I suggest that the future natures of de-extinct species are not necessarily inauthentic or artificial simply because they have been modified by humans.[6] Indeed, such a definition of “authentic” nature as prehuman or prehistoric is a misguided one if we assume that humans are dissociated from nature rather than intimately connected with it. The mammoth is perhaps the prime example of a species that has a contested aura of authenticity — first because of its interactions with Palaeolithic humans, which may have partially led to its demise (and to perhaps one of the first anthropogenic, or human-caused extinctions), and then through its proposed resurrection by de-extinction scientists. With the freezing of mammoths in the permafrost thousands of years ago, these creatures are already shrouded in fictive potential because of their ties to a far-removed prehistoric time that lies beyond our experience and which must be filled in with narratives through the power of the imagination.

Whether held in stasis naturally (in the permafrost) or artificially (in the lab), cryopreservation exemplifies the emergence of what cultural theorist Astrida Neimanis calls “thick time.” Examining speculative reproduction and cryobanking practices, Neimanis defines thick time as the way cryobanking “gathers all of the pasts and possible futures within itself.”[7] While the frozen matter may be disentangled from bodies, Neimanis argues, it cannot be disentangled from time. As a result, to imagine the narrative futures of de-extinction candidates like the mammoth or other extinct/endangered species is to consider the expansion of the very definition of the archive and those in power to compose these narrative futures. To think and imagine speculatively is the territory of speculative fiction, a genre that sketches the elements of a real world that is imagined otherwise. It is to ask: what world are we making? What does a 21st century mammoth look like, how does it behave, and what relationships does it form? It is to ask how space and time distend and stretch to create an alternative future. This is not merely the stuff of science, but the work of fiction.

[1] Darian West, “Did a Group of Scientists Eat a Mammoth?” Medium, 8 November 2019. https://medium.com/swlh/did-a-group-of-scientists-eat-a-mammoth-f308f12866f7 Accessed 23 August 2022.  Note that the prospect of eating mammoths is also a present-day concern due to the rise of in-vitro meat production. See “Woolly Mammoths Are Making a Comeback. Should We Eat Them?” by Tom Ought, Independent, 10 August 2022, https://www.independent.co.uk/life-style/food-and-drink/woolly-mammoth-extinct-revival-diet-peta-b2142058.html. Accessed 23 August 2022.