The Art and Science of Species Revival

Call for Papers for a hybrid (online and in-person) symposium at LCAB, 14-16 December 2022, which will bring together scholars and creative practitioners to consider the intersections of art and science that have been aroused by the prospect of species revival.

In the 5 minutes that it will take you to read this Call for Papers, a plant, bird, insect, or mammal species will have gone extinct. Yet in this same 5 minutes, geneticists in the Big Tech-funded Colossal lab will also be one step closer to programming strands of extinct mammoth DNA using CRISPR-Cas9. CRISPR (an acronym for Clustered regularly interspaced short palindromic repeats) is a gene editing tool that has quickly become touted as the “solution” to the mass extinction crisis, among a number of other global challenges.

Yet in addition to being a creative application in and of itself (producing everything from CRISPR babies to medical therapies) it is also a creative medium. In a popular article for The Atlantic in 2017, Pulitzer Prize-winning science journalist Ed Yong reported that Harvard geneticist Seth Shipman had used CRISPR to encode a five-frame GIF of English photographer Edward Muybridge’s famous galloping horse into microbial DNA. This tool has also been employed by other scientists, Yong writes, “to encode all of Shakespeare’s sonnets, a clip of Martin Luther King Jr.’s ‘I Have a Dream’ speech, and a PDF of the paper from James Watson and Francis Crick that detailed the structure of DNA.” It is perhaps no coincidence that the ever-expanding uses of CRISPR also reference the history of technological innovations and cultural movements, from the crafting of the sonnet to the making of the first moving images and the discovery of DNA’s codes and structures. Positioned at the vanguard of biotechnological innovation, CRISPR marks a fundamental shift in the way we think about the cross-dissemination of art and science.

The science of species revival, which aims to resurrect extinct species through a suite of tools including CRISPR along with back-breeding and reproductive cloning techniques, is likewise inspiring a wave of new artistic responses. In Resurrecting the Sublime, artist Daisy Alexandra Ginsberg collaborates with an interdisciplinary team at Ginko Bioworks who utilised synthetic biology to extract DNA from flowers that have gone extinct due to colonialism. From the samples collected from Harvard University’s Herbaria, selected genes from these flowers were then resynthesized by the team for fragrance-producing enzymes and reconstructed in the lab as a speculative smell of the botanical past. Earlier this year, the painter Clive Smith exhibited his de-extinction-inspired collection Speculative Bird Paintings, which blends natural scientific manuals of birds with what Smith calls the “DNA of painting” to recreate future species through the artistic styles of Mark Rothko, Jackson Pollock, and Claude Monet (to name but a few examples). 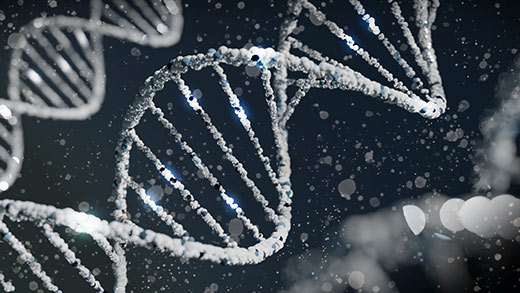 It is becoming increasingly clear, as Hannah Star Rogers argues, that the tools of art and science “are not as different from each other as we might assume.” Indeed, de-extinction science is itself a creative enterprise, drawing not from the discovery of extinct species in the form of ancient DNA, but on the ability of scientists to produce living animals using this genetic information: as Beth Shapiro writes in the 2020 edition of How to Clone a Mammoth, “If we want a living mammoth cell, we’re just going to have to make one ourselves.” In responding to mass extinction, how and why certain species come to be selected for revival often comes down to the conservational and cultural values that are forged through, and co-constituted by, the exchange of artistic and scientific practices.

With these ideas in mind, the aim of this interdisciplinary symposium is to bring together scholars and creative practitioners from across the arts, humanities, social sciences, and biotechnological and natural sciences to consider the intersections of art and science that have been aroused by the prospect of species revival. We particularly invite papers that address any aspect of the following questions:

Abstracts of 300 words along with a 50-word bio can be sent to Sarah Bezan and Peter Sands by 1 November 2022. A special issue of the journal Configurations: A Journal of Literature, Science, and Technology will be the proposed outcome of this meeting.

Abstracts of 300 words along with a 50-word bio should be sent to Sarah Bezan and Peter Sands by 1 November 2022.

Abstracts of 300 words along with a 50-word bio should be sent to Sarah Bezan and Peter Sands by 1 November 2022.