Live audiovisual performances at the University of York will provide a striking graphic representation of satellite ozone data and its impact on human health.

Blending saxophone (James Mainwaring), guitar (Tom Adams) and electronic hardware, the band of York graduates promises to create a unique and powerful sound, visualised with custom made 3D projections made by Jakub Hader.

The free event, open to all staff and students, will take place in the 3Sixty immersive space in the Ron Cooke Hub on 18 and 19 November.

The project is a collaboration with SEI, and is linked to UNEP’s ‘Integrated Assessment of Black Carbon and Tropospheric Ozone’.

Dr Rudnicki, says: “The idea is to communicate global scientific issues through audiovisual performances based on the satellite ozone data from NASA. We want to raise awareness of the issue and show that ozone is harmful for human health.

“The York performances will coincide with a major international conference – the Warsaw Climate Change Conference – which will be discussing these issues at the highest policy level.”

Each performance is unique as the band uses improvised sound material and generative audio-reactive visualisations. Custom made modular scenography for visualisations/3D mapping is used and reacts in real time to the improvised music. 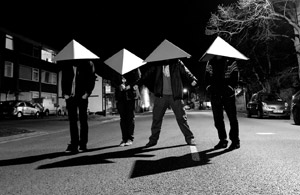 Dr Hicks says: “I’m excited about this piece because I think it operates on three levels: first of all it’s a piece of music that can be enjoyed in its own right. Secondly, people who listen will be exposed to the ozone issue, and thirdly, it can be used as a data analysis tool, so by using music you might be able to see differences in the data that might not be so obvious to the human eye.”

The impacts of ozone depend to a great extent on location. The band Space F!ght has based its work on data gathered by NASA’s infrared TES spectrometer, aboard the Aura satellite, drawn from six locations around the globe with contrasting levels of ozone – London, New York, Beijing, the Sahara, the Amazon, and New Zealand. Average monthly ozone concentration was used for each location over a period of 12 months.

Ozone levels, specifically ozone closer to the earth’s surface, have significant negative impacts on human health, climate and crop yields. SEI staff have worked with the NASA Goddard Institute for Space Studies to make a sound picture of ozone concentrations around the world.

Space F!ght will present three audiovisual performances at 8pm on 18 November and at 1pm and 8pm on 19 November at the 3Sixty, Ron Cooke Hub, Heslington East. For a free ticket visit www.eventbrite.co.uk/org/4975477237