Archive event uncovers the story of York’s pacifist past

The tensions caused by York’s history of pacifism and conscientious objection during World War I are laid bare in a fascinating forthcoming talk and exhibition at the University of York’s Borthwick Institute for Archives.

Arnold Stephenson Rowntree and the Business of Conscientious Objection focuses on the life and beliefs of Arnold Rowntree, nephew of philanthropist and chocolate manufacturer Joseph Rowntree. As a Quaker and Liberal MP for the city, Arnold championed the cause of the city’s conscientious objectors, young men who - often drawing on Quaker principles - refused to take up arms. 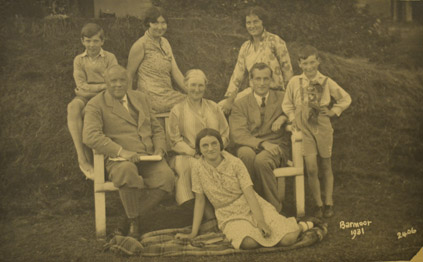 Arnold Stephenson Rowntree seated (left) with his wife, Mary Katherine and their children pictured in the grounds of Barmoor House at Hutton le Hole in North Yorkshire (credit: Rowntree Society Archive at the Borthwick Institute for Archives, University of York)

As the exhibition shows, it was a stance which brought Arnold into direct conflict with politicians, the military and the families of those on the front line. It also created tensions within the Rowntree family when Arnold’s cousin Lawrence opted to go to war.

Dr Bridget Morris, Director of the Rowntree Society, will open the event on 23 November at 1pm with a talk in the Borthwick Institute on the surviving sources of archive and published material relating to Arnold Rowntree and conscientious objection in York.

Following the talk, archives from the exhibition will be available for the public to study and explore with the help of archive assistants throughout the afternoon.

The exhibition features family photograph albums, letters and business papers from Quaker institutions in York such as The Retreat hospital and the Rowntree  company. Newspaper articles and letters, some voicing strong criticism of Arnold’s pacifist stance and some supporting his views, are also included.

“It is obvious from the archives that the issue of conscientious objection aroused strong feelings across the city,” said archive assistant Alexandra Medcalf who compiled the exhibition with colleague Nathan Williams.

“One newspaper article from the Yorkshire Herald refers to a Quaker meeting as a hotbed of ‘shirkers and slackers’. Newspaper letters pages also featured some criticism of Arnold Rowntree’s views. But interestingly, the exhibition also shows that not all Quakers were pacifists with many expressing more nationalistic views.”

Despite fierce local criticism, Arnold Rowntree made the most of his profile as an MP and a leading businessman to highlight the cause of those who refused to fight. His efforts included a leading role in the establishment of the Friends Ambulance Unit, a volunteer group which ferried casualties from the front line allowing conscientious objectors to contribute to the war effort without direct combat.

Tensions continued after the war with many conscientious objectors struggling to find jobs. The exhibition shows Arnold used his influence within the family chocolate business and as Chairman of the management committee at The Retreat hospital to get many objectors back into work.

Arnold lost his seat in the 1918 post-war election going on to become director of the family chocolate business, Associated Newspapers and the Westminster Press newspaper group. He also supported the establishment of adult schools and retained a close interest in Bootham and The Mount Schools in York. Arnold, who was married with six children,  died at his home in Thornton le Dale in 1951 aged 79.

The afternoon exhibition is part of a national Explore Your Archive event which aims to encourage people to use archives to discover the stories, events and the people at the centre of our communities.

The event is free. Anyone interested in attending should contact the Borthwick Institute for Archives on 01904 321166 or email borthwick-institute@york.ac.uk

Take time to explore The Borthwick Institute for Archives at the University of York, one of the biggest archive repositories outside London.