An Evergreen and Pleasant Land?

Pete Yeo, reconciliation ecologist and nature mentor, explores Britain's ecology through the lens of William Blake's poem 'And did those feet in ancient times'

(The inspiration for this piece was received from William Blake’s poem that later became the hymn Jerusalem.)

This has not always been the case; not so long ago in the geological past the climate was too frigid for most plants, whilst further back in time it has been decidedly subtropical. These warmer epochs witnessed the prominence of evergreen woody species, such as those constituting so-called laurel forest. Climate change is now inviting such vegetation back with profound consequences for our relationship with the land and its always evolving ecosystems.

Laurel forest is characteristic of those lands that have a subtropical climate, both warm (not hot) and wet, often forming the ecological transition between tropical and temperate vegetation (though also found at higher and cooler elevations in the tropics). Alternatively known as laurisilva it is dominated by broad-leaved woody evergreens, their glossy leaves reminiscent of the true laurels (Lauraceae, a family of ancient lineage), many of whom are present. Certain warmth-loving needle-leaved evergreen conifers also feature.

And did those seeds in ancient time,

In his book, Inheritors of the Earth (2017), evolutionary biologist Chris Thomas draws attention to the Pliocene epoch (5.3-2.6 million years ago). Then, global climate was 2-3 degrees Celsius warmer, and thus moister, than today, and this is the likely climate territory we will reach by the end of this century. In the Pliocene laurel forest was far more prominent in Europe than it is today. Whilst most scholars doubt Jesus ever set foot in England (the question in Blake’s poem), and the fossil record is patchy in regards to past flora, at least some laurel forest representatives will have been present here at that time. Wind the geological clock back towards the even warmer Eocene (56-34 mya) and there is clear proof for this part of the Earth.

Of course, nothing lasts forever. These biodiverse European forests became impoverished by the succession of Pleistocene ice ages (2.6m-11,700ya) which removed most of the cold-sensitive trees, including a majority of the broad-leaved evergreens. Due to the obstructive alignment of European mountain ranges their chances of ever returning from their southern refugia, such as the Iberian Peninsula, were greatly reduced compared to, say, the eastern parts of Asia and North America. And yet some were able to head north again after the ice ages, though these were descendants that had learnt to cope with cooler, drier conditions. English natives holly and ivy are both examples (to which we can add the conifer yew), whilst other laurel forest relicts such as cherry laurel, holm oak and rhododendron were able to make it to the British Isles during one or other of the warmer interglacial periods (a reality that strangely has no bearing on nativeness).

That last trio are once again reappearing (the rhododendron often as a new hybrid), a Second Coming of sorts - or perhaps third, or fourth - not welcomed by everyone (think: ‘alien invasives’). They are being joined by a significant number of far-flung broad-leaved evergreens, especially from Asia, many of whom are close relatives of pre-ice age species. Indeed, I recently observed my first wild camellia seedling, relatives of which are known to have been present in England back in the Eocene. What’s even more telling is that it’s not just woody representatives of laurel forest that are now thriving; Caucasian giant hogweed, Chilean giant rhubarb and Japanese knotweed all hail from laurisilva zones. The Botanical Society of Britain & Ireland’s wild distribution maps illustrate the extent of naturalisation of such species, some being more advanced than others. The heat island that is London along with the warmer parts of England, Ireland and Wales tend to witness the first arisings. 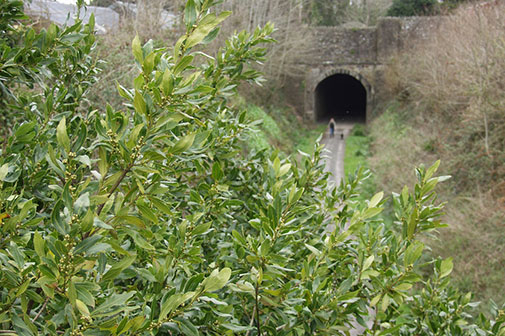 A new and ancient flavour to our landscape; bay laurel (the culinary herb) is becoming increasingly common in the wild across southern Britain.

I’ve been closely following one particular broad-leaved evergreen species for many years - bay laurel, the familiar culinary herb. This Mediterranean laurel forest relict, and a true laurel at that, has been cultivated in sheltered localities around Britain for centuries, yet was only observed wild from 1924. That lag is far beyond any expected for a climate-compatible species and strongly suggests a warming factor, with bay laurel now becoming commonplace outside of gardens around southwestern England in particular, where I live. I offer a small, local peri-urban roundabout as example; the native species planting of 30 years surrounding it now features an emergent laurel-like understory with over 120 evergreen saplings. Of these, bay laurel is co-dominant alongside holm oak, with some native holly and a small amount of laurustinus (also from the Mediterranean). Bay laurel is clearly enjoying the warming climate, along with, I suspect, our wetter western seaboard which already supports a variant of temperate rainforest. In turn, birds are obviously relishing this new local forage, its black fruits like mini-avocados (to which it is related).

As Chris Thomas puts it, ‘the rediversification of European forests is underway.’ Admittedly, this is not simply due to our warming climate and reducing frosts that now allow seed-set and dispersal. The process has been facilitated by our global society, our love of trade and, especially, horticulture. This ecological mixing was likely inevitable at some point due to larger Earth cycles yet it all represents a great acceleration of evolutionary processes, and brings novel tensions. We are where we are, however. Whilst throw-back winters may occasionally slow evergreen progress, sufficient warming is already locked-in, however good our efforts at emission mitigation. This invites us to adapt and welcome laurel forest species, and to reconcile ecological and cultural tensions as far as possible, without need for Blake’s ‘chariot of fire’. 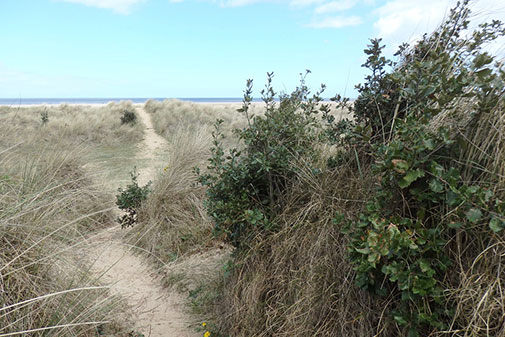 Holm (holly) oak is already extensively naturalised across southern Britain, as here along the Norfolk coast, and regarded as an invasive species by some.

For this floral shift has consequences; there will be losses, and there will be gains. For example, broad-leaved evergreen trees and shrubs can create a dense, year-round shade to the detriment of herbaceous flora, such as Britain’s popular woodland wildflowers. Native holly is no different in this regard. However, we have a relatively small native flora, especially in regard to woody plants, and laurel-like species will enrich our beech- and oak-dominated woods. Increased biodiversity equates to more options and greater resilience as our ecosystems – our life-support systems – face an uncertain future. So, on the one hand a heartfelt aesthetic loss, on the other an overall ecological gain, though future generations may be less invested in the loss as a result of shifting baselines.

Laurel forests don't represent an ecological downgrade; instead they can be seen as a future-fit ecosystem upgrade. Consider that warmer and wetter conditions tend to benefit fungi, including the pathogenic kind. It’s probably no coincidence that cherry laurel and rhododendron are both known to be resistant to such threats. The leaf litter of introduced bay laurel has also been shown to often support subtropical, even tropical, fungi, which leads me to wonder about the role of such evergreens in supporting climate-compatible fungi (or vice versa). For the appropriate fungi, whatever their specific ecological role, are critical to ecosystem functioning. This exemplifies the challenges facing ecological relationships with the northward migration of species.

Given the ecological resilience offered by broad-leaved evergreens there may be the temptation to be proactive and accelerate their presence across our landscape, though caution might recommend simply allowing spontaneous naturalisation (a similar tension being apparent within the rewilding movement in regard to native species, of planting versus spontaneous growth). The forestry sector is already thinking ahead, trialing eucalyptus and holm oak, as well as thermophilous needle-leaved evergreens like Atlas cedar, Japanese cedar and coast redwood. And as our agricultural sector evolves, toward regenerative practices in particular, we may see the rise of our own versions of traditional Iberian agroforestry systems, featuring evergreen tree crops like cork and encina (a variety of holm) oaks.

Both sectors could increase evergreen naturalisation, but neither to the extent of horticulture. The RHS report Gardening in a Changing Climate (2017) offers a glimpse of the relevant changes we might expect in this sphere. It suggests that camellia, escallonia and other broad-leaved evergreens could become the dominant hedge and boundary plants in the West Country by 2100. Warmer still yet drier East Anglian gardens could (in 2100) feature many of the laurel forest relict species that survived around the Mediterranean, such as myrtle and strawberry tree. Both scenarios would nurture an increasingly evergreen landscape, and likely be augmented by other subtropical evergreens such as palms. 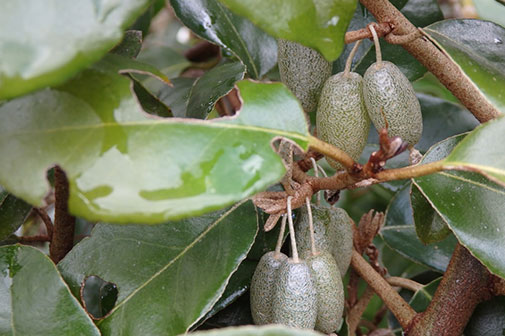 Silverberries (Elaeagnus) are now beginning to naturalise as a result of better fruit set. The author observed his first sapling (of a garden hybrid) in 2019, in Devon.

One way or another our landscape is going to change over the next few generations, perhaps dramatically. My vision is that the necessary responses come as consensual evolution rather than the apparent revolution in Blake’s poem. Key to this will be the ability to see beyond the losses relating to all meanings of this ‘green and pleasant land’, toward the laurel-like silver linings set to ‘shine forth upon our clouded hills’. That way, we help liberate the future from the past, ‘dark satanic mills’ and all.

Whilst it’s been fun to riff with William Blake’s poem, it highlights the importance of responsibility and choice. Our actions, and the perceptions that inspire them, will decide whether we meet a pleasant land in the future. As we undertake a necessarily sacred renewal of our relationships within the dynamism that is Life, a bigger canvas eagerly awaits the more reverential flourishes of our human artistry.

Find out more about Pete Yeo and his research.

Find out more about Pete Yeo and his research.