I’d been to Askham Bog Nature Reserve a few times over the past years; a mix of fen, woodland and meadows, maintained by the Yorkshire Woodland Trust, just to the west of York. But mostly, given free time for walking, I’d head to mountains, dales or moors.  During lockdown, that’s not been possible and so I have been walking several times a week at Askham Bog.  I’ve walked at different times of day, in different weathers, as Spring has unfolded and I’ve come to know it intimately and to love it. 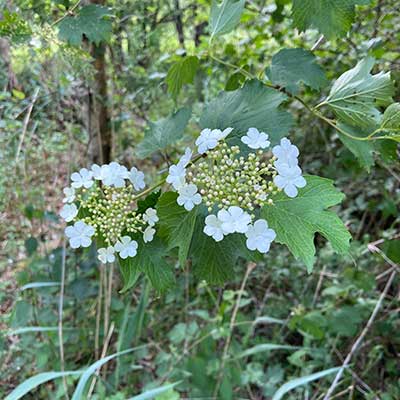 The distinct clusters of creamy-white flowers of the Guelder rose

As lockdown started, there were king cups and cuckoo flower.  Now there are yellow flags, briar rose, may blossom and guelder rose. I’ve watched the royal fern grow from short, furled shoots to be taller than me. I have a new plant identification app, so I can identify the diversity of the flora and learn about the plants I’m seeing.  Mostly I walk alone, but sometimes my husband joins me, and the app helps us resolve mild disputes about the naming of plants.  His cuckoo flower is my lady’s smock and it turns out we’re both right – not surprising, really, as we grew up at different times and in different places. We’ve also found a large clump of poison hemlock, so we’ll stay committed to keeping those disputes mild… 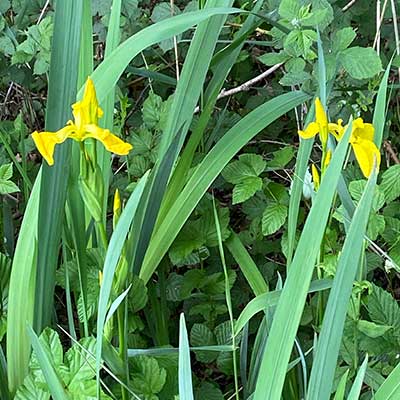 Many of us have been appreciating birdsong during lockdown and walking at twilight is my favourite time as the birdsong is both lilting and operatic.  There are many wrens, there are tree creepers, and a robin that will come within a few inches of my outstretched hand.  There are two pigeons who hang out in a particular corner, strutting around like teenage lads.  There is a magpie (one for sorrow), moorhens and ducks, but not yet a sighting of the kingfisher promised on the information boards. 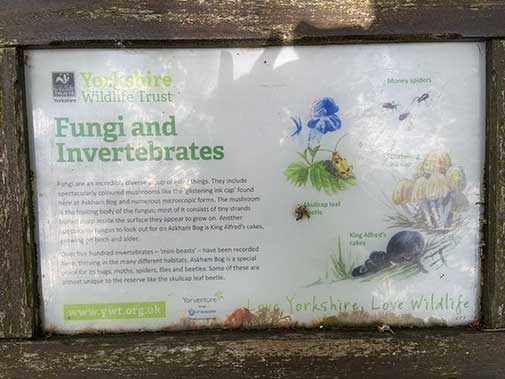 One of the many information boards dotted around the reserve

The most obvious Anthropocene aspect of the bog are these helpful information boards – I long to see the black King Alfred’s Cake fungi as well as the kingfisher – and the raised wooden circular walkway that encloses the heart of the woodland – it’s about 1000 steps round so I can briskly go round and round, sometimes clockwise, sometimes widdershins, to meet my Fitbit goal.  But there are also beguiling stiles leading to paths through the meadows, perfect for meandering, meditative walking, and remarkably unboggy during this spectacular Spring.

All of the biodiversity within this special space is protected and maintained by human action.  It was humans who designated the bog a Site of Special Scientific Interest, protecting it from development, damage and neglect.  It was the action of some humans that led to the refusal, just this month, of planning permission for 500 new homes right next to the bog, after a long and tireless campaign by the Trust and its supporters.  Askham Bog is safe for now – safe for the children dipping for tadpoles, safe for the older couples sitting on the bench by the pond, and safe for me to continue my new love affair with it.  The mountains, dales and moors will beck once again, but I’ll keep coming back to my little, lockdown, local, patch of Anthropocene biodiversity.

Professor Kate Pickett is an Associate Director of LCAB, Professor of Epidemiology and Deputy Director of the Centre for Future Health at the University of York.

Professor Kate Pickett is an Associate Director of LCAB, Professor of Epidemiology and Deputy Director of the Centre for Future Health at the University of York.