A brief history of the King's Manor

Following the Dissolution of the monasteries, the Manor was retained by the Crown and allocated to the Council of the North. It became the official residence of the President of the Council in 1561 and was gradually enlarged and extended westwards. Much of the building work was done during the reign of Elizabeth I.

In the late 16th century, under the Earl of Huntingdon (President of the Council from 1572 to 95), residential wings and a service building were added. Ashlar work in the Manor after the 1560s is of reused stone from St Mary's Abbey. The Huntingdon Room in the Elizabethan extension has an impressive plaster frieze with the arms of Henry Hastings, Earl of Huntingdon.

The Stuarts stayed regularly at the Manor en route from Edinburgh to London, and in their time a new U-shaped building created the present, curiously irregular first courtyard. The 17th century Council Chamber is now the Refectory. The decorative doorway at the main entrance is Jacobean.

The abolition of the Council in 1641 halted building, beginning two centuries of retrenchment. After 1688, the Manor was leased out, divided into apartments and gradually declined.

The foundation in 1833 of the Yorkshire School for the Blind marked a new start. From the 1870s the Manor was gradually restored and enlarged by the architects JB and W Atkinson and Walter Brierley. In the 1890s they built a gymnasium and a cloister to create the second courtyard. The Principal's house, now home to the Centre for Medieval Studies, was built in 1900.

On the departure of the Blind School in 1958, the Manor was acquired by York City Council, who leased it to the University in 1963 which used it to house the Institute for Advanced Architectural Studies. A major restoration by Feilden & Mawson swept away many service buildings and replaced an 1880s schoolroom with a modern tutorial block, now occupied by the Department of Archaeology, which incorporates the former Institute and its world-famous Conservation Studies MA.

The King's Manor has been the backdrop to many facets of University life - even, in the 1960s, to a student bar. There has been a unity of purpose in bringing together areas of scholarship at the University of York which have a common interest in the study of the cultural environment. 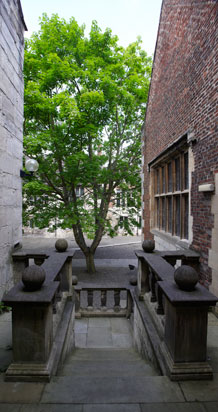