Listen to experts from around the world as they provide perspectives on key trends for 2022 and beyond. Laurie Goering, Climate Change Editor at Thomson Reuters Foundation, will moderate a conversation with SEI chairperson Isabella Lövin, WRI Vice President and Regional Director for Africa Wanjira Mathai, Independent Strategic Advisor George C Varughese and Special Advisor to the President and CEO at the World Business Council for Sustainable Development Dominic Waughray. 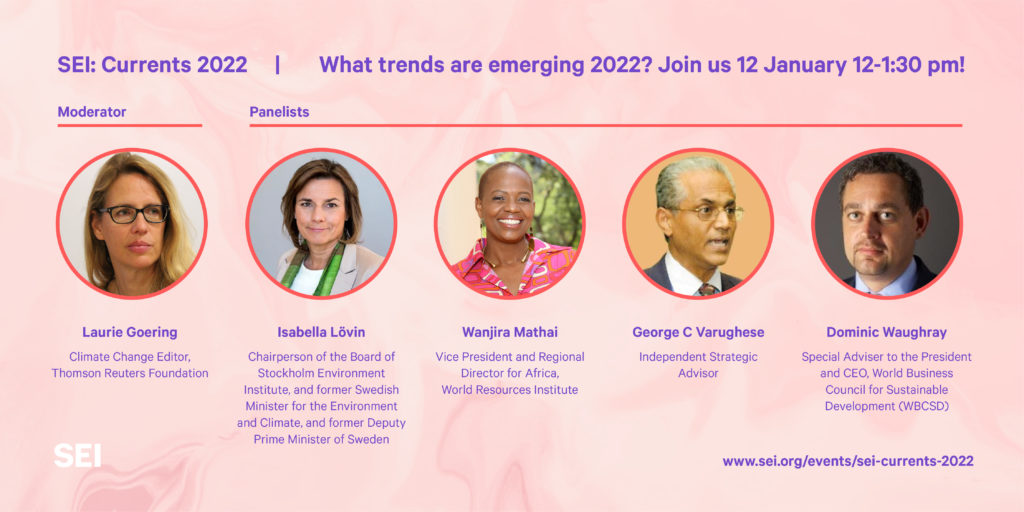 The world is in transition, accelerated by the impacts of climate change, the effects of the pandemic and the growth of inequalities worldwide. What risks and opportunities are surfacing? What issues warrant greater attention?

Take part in the event as experts from different continents offer their perspectives on these trends for 2022 and beyond.

Måns Nilsson, SEI Executive Director, will open the event and Robert Watt, Director of Strategic Communication and Policy Engagement, will introduce the trends we are watching. An expert panel will discuss the trends on the horizon for 2022.

Chairperson of the Board of SEI, former Swedish Minister for the Environment and Climate and former Deputy Prime Minister of Sweden

Isabella Lövin is new chair of SEI and former Minister for Environment of Sweden and Deputy Prime Minister. She is an award-winning journalist and author of the renowned book Silent Seas – the Fish Race to the Bottom and was a member of the European Parliament from 2009–2014. In 2014, she was appointed Sweden’s Minister of International Development Cooperation and later became Minister for  Climate and the Environment. She was elected as co-spokesperson of the Green Party in 2016 and left politics in February 2021.

Isabella Lövin holds an Honorary Doctorate from the World Maritime University for her work to protect the oceans and the Swedish University of Agricultural Sciences for her efforts to focus on fishery issues in Sweden and internationally.

Wanjira Maathai has over 20 years of experience advocating for social and environmental change on both local and international platforms. Over the years, she has also served important strategic and advocacy roles raising the prominence and visibility of global issues such as climate change, youth leadership, sustainable energy and landscape restoration, at Women Entrepreneurs in Renewables, the Wangari Maathai Foundation and the Green Belt Movement, the organization her mother, 2004 Nobel Peace Prize Laureate Wangari Maathai, founded in 1977. She was named one of the 100 Most Influential African Women in 2018 and 2020.

Special Adviser to the President and CEO, World Business Council for Sustainable Development

Dominic Kailashnath Waughray is Special Advisor at the World Business Council on Sustainable Development. He was previously with the World Economic Forum (WEF) for nearly 16 years, initially as inaugural Director of Environmental Initiatives, then as Head of Public Private Partnership, Member of the Executive Committee from 2013–2018 and Head of Centre for Global Public Goods from 2018–2021, with responsibility for WEF collaboration with the international community on delivering partnerships for the Sustainable Development Goals.

Register for the event