Prof. Simon Ditchfield and Dr Stefan Bauer co-hosted the sell-out conference: 'Burckhardt at 200: the "Civilisation of the Italian Renaissance” reconsidered’ at the headquarters of the British Academy in London on 31 May-1 June 2018. 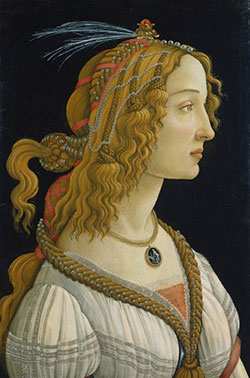 This year marks the 200th birthday of Swiss scholar and historian Jacob Burkhardt. To celebrate the 200 years since his birth, The Centre for Renaissance and Early Modern Studies (CREMS) were involved in a series of highly successful events.

Interpreting the Renaissance in the 21st century

The lively questions from the floor clearly showed that one can and should never underestimate the appetite of the general public for sustained discussion of serious issues.

The event was hosted by the British Academy and was chaired by Professor Amanda Lillie, Professor of History of Art, University of York.

Burckhardt at 200: The Civilization of the Italian Renaissance reconsidered 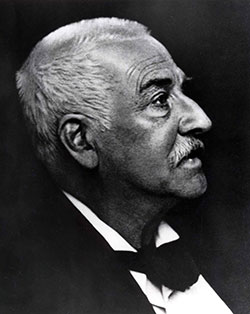 This conference looked at Jacob Burckhardt's book, The Civilization of the Renaissance in Italy and considered whether or not the idea of an ‘Italian Renaissance’ is still a hermeneutically helpful one. Speakers were in attendance from the UK, Germany, Switzerland, Italy, Canada and the USA.

Professor Simon Ditchfield (Professor of Early Modern History) and Dr Stefan Bauer (Early Modern History Lecturer) as well as Professor Michelle O’Malley from The Warburg Institute, were tasked with interrogating both the Swiss historian’s own agenda as well as the contemporary validity and helpfulness of the label ‘Italian Renaissance’.

The British Academy offers funding for 'conferences that will be pivotal events, of lasting significance in their field: a chance for leading and emerging scholars to examine current and future issues surrounding novel, dynamic, innovative and exciting subject areas in the humanities and social sciences.' Out of 80 applicants only six were chosen and Burckhardt at 200: The Civilization of the Italian Renaissance reconsidered, was one of them. Lead organiser and ideator, Professor Simon Ditchfield had to make the application and said:

There is a presumption that convenors of those conferences that are adopted into the 2018 programme of British Academy Conferences will aspire to publish an edited volume of essays arising from the conference and an expectation that, in due course, a proposal would be submitted for such a volume to be published in the Proceedings of the British Academy.

The event, which took place on 31 May and 1 June at the British Academy sold out, and ten Society of Renaissance Studies funded postgraduates and ECRs were amongst those who attended. ‌ 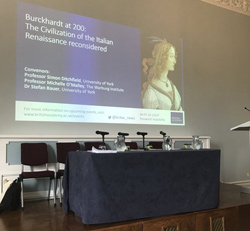 Burckhardt at 200: interpreting the Italian Renaissance past, present and future‌

Johnathan Jones, a speaker at the event, has written a piece for the Guardian entitled Meet Jacob Burckhardt, the thinker who invented 'culture' where he talks about the way he believes Jacob Burckhardt, helps us understand our world just as much as his contemporary, Karl Marx.‌

Find out about the Centre for Renaissance and Early Modern Studies

Discover more events at the British Academy and The Warburg Institute