Research carried out by York atmospheric chemists was featured on Grand Designs, as a family in South-West London built a low-VOC emitting house. 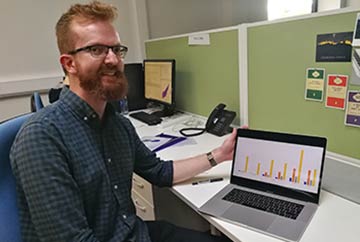 Scientists from the Wolfson Atmospheric Chemistry Laboratories (WACL) in the Department of Chemistry, University of York, were called on to measure VOCs (Volatile Organic Compounds) in a ‘hypo-allergenic home’ on this week’s edition of Grand Designs. The programme, which aired on Wednesday 3 October at 9pm, followed a couple building a home for their two sons who suffer from life-threatening allergies. A main aspect of the challenge was to complete the build with minimal use of materials which emit VOCs. Once the house was completed, the show called on scientists from WACL to test its effectiveness.

Aiden Heeley-Hill, a PhD student who carried out the analysis with the help of Dr Jim Hopkins, said:

“My supervisor, Prof. Ally Lewis, asked if I wanted to get involved in the project."

"We sent air sampling canisters to the house, to quantify VOC levels, and samples were taken over a period of three days.”

A wide range of VOCs were analysed, including isoprene, benzene and xylenes, and the results were compared to the average concentrations of the compounds in a typical new build property. The results suggested, in most instances, significantly lower concentrations of VOCs in the home, with benzene and isoprene displaying the greatest reductions at over 95%. At the end of last week’s episode of Grand Designs, Presenter Kevin McCloud was shown using a graph produced by Aiden to discuss the results with the family. 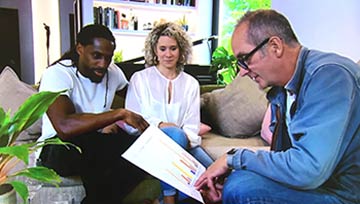 Aiden went on to explain:

“It was really interesting to see the programme and understand more about the family’s motivations for building the home and although we already knew what the results were, it was nice to see them being presented as part of the show.”

“As outdoor air quality continues to improve in the UK more attention is now being paid to air inside. Modern homes are very energy efficient and that can mean they trap pollution inside. Our analysis shows that by selecting low VOC building products you maintain low concentrations indoors, even in a brand new home.”

The Wolfson Atmospheric Chemistry Laboratories, established in 2013, enable experimental and theoretical studies relating to the science of local and global air pollution, stratospheric ozone depletion and climate change. WACL operates as a collaborative venture between the University of York and the National Centre for Atmospheric Science (NCAS), co-locating more than 50 researchers from seven academic groups and NCAS.

The programme, entitled “Richmond 2018” is available to view for a limited time on the Channel 4 website.