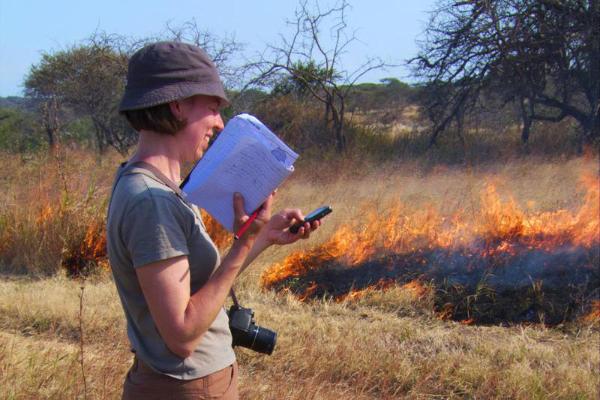 Despite the popular portrayal of East African savannahs as icons of wilderness, the reality is that human influence in these ecosystems is pervasive and savannah ecosystems are undergoing relatively rapid change. A global increase in trees and bushes in savannahs is well known, changes in wildlife populations are widespread and rapidly changing distributions and abundances of savannah birds hint at more subtle changes to the ecosystem. These changes are likely responses to a variety of human pressures from the direct impacts of increased CO2, through the increasingly settled pastoralist communities, to the impacts of changed rainfall patterns associated with global climate change. To maintain healthy ecosystems that can support wildlife and pastoralist communities alike, land managers have one main tool available: fire. Fires are deliberately set in most savannahs every year to encourage grass growth, to control insect pests and to manage the balance of trees and grasses across the landscape. Savannah trees, grasses and animals are all adapted to a fire prone ecosystem, yet it is unclear exactly how managers should burn savannah landscapes in this changing environment: they have the option of altering both fire frequency and burning season, both factors known to influence savannah ecosystems.

The initial project brought together leading experts in savannah and fire ecology working in eastern and southern Africa to share knowledge and understanding of fire impacts in the savannah at the site of a new, large-scale experiment in the Serengeti ecosystem. Although eastern and southern African savannahs are ecologically relatively similar, political differences between the regions previously led to limited academic exchange. In East Africa, ecosystem research in Serengeti is well developed, but the relative importance of fire and its interactions with rainfall, nutrients and large mammal herbivore densities is still relatively poorly known.

The network aimed to bring together experts from across the spectrum of ecology (from mathematical ecologists to vegetation scientists, from ornithologists to entomologists) to expand our understanding of fire in savannahs generally and in the Serengeti ecosystem specifically. Through five meetings based in the experimental site in Serengeti we gathered data and pooled our expertise and data from elsewhere to address specific questions about the fundamental ecology of savannahs.

As a result of these meetings researchers are undertaking large-scale analyses based on satellite data and linked to ground surveys, and they are running small-scale manipulations of grazing and fire on long-term experimental sites. Partnering with representatives of pastoralist communities and development focused Non-Governmental Organisations (NGOs), they are drawing together the fundamental research to develop coherent practical guidelines for fire and grazing management that increase the resilience of grassland ecosystems.