A prolific researcher and leading historian of the later Middle Ages. 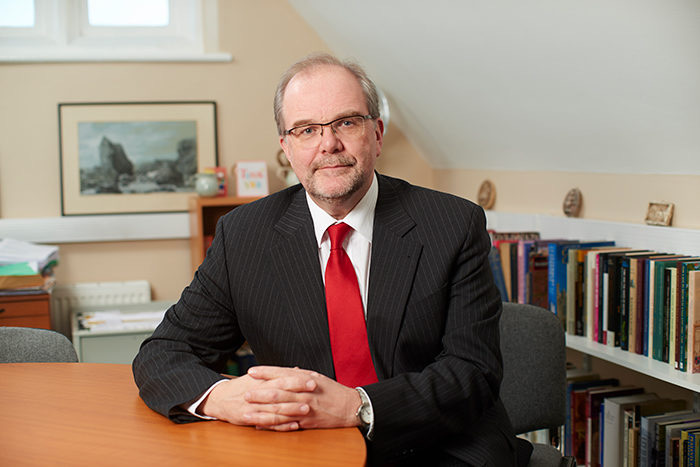 Professor Mark Ormrod passed away on 2 August 2020, in St Leonard’s Hospice, after a long illness which had caused him to retire early from the University in 2017 but did not impede his research and publication.

Mark was a leading historian of the later Middle Ages in Britain. He completed his doctorate in 1984 at the University of Oxford and then held a number of positions at the Universities of Sheffield, Evansville (British Campus), Queens University Belfast and Cambridge. In 1990 he moved to a lectureship at the University of York and was promoted to Professor in 1995. His experience of what is now widely known as ‘precarity’ in this early phase of his career always informed his nurturing of students and early career colleagues, whose careers were at the forefront of his mind in the creation of the many funded research projects that he so successfully established.

Mark was Director of the Centre for Medieval Studies from 1998 to 2001 and 2002 to 2003, and Head of the Department of History in 2001 and from 2003 to 2007. He also struck up a very close working relationship with the Borthwick Institute for Archives. He was a natural choice as the first Dean of the newly created Faculty of Arts and Humanities at York in 2009, a position that he held until his retirement in 2017.

While taking up these leadership roles, research remained Mark’s chief joy: he is the author or co-author of at least nine books, fourteen edited collections and well over eighty book chapters and articles. These included the definitive 700-page biography of Edward III (Yale, 2011), an exceptionally complex project that had defeated several earlier scholars. His penultimate book, Women and Parliament in Later Medieval England, was published by Palgrave in July 2020 while his last book, Winner and Waster, was delivered to the publisher just 10 days before he died; a further major collection of essays is forthcoming from the British Academy later this month. Hallmarks of his scholarship included the combination of accessible narrative with major new interpretations of important topics based on scrupulously thorough archival research; a combination of insight and detail that is rarely mastered.

In addition to his own writing he also supervised twenty-eight PhD theses. He was the Principal Investigator on nineteen major externally-funded research projects that were worth over £4m and provided early career positions to many former students. In July 2020 a festschrift compiled by these former students and colleagues was presented to Mark at a tribute to that mentorship (Monarchy, State and Political Culture, ed. Craig Taylor and Gwilym Dodd).

Mark's externally-funded projects centred on creating public access online to the extensive but often obscure records of medieval government from The National Archives and the Borthwick Institute for Archives. A particularly well-received project, England’s Immigrants 1350-1550, identified circa 70,000 immigrants living in 15th-century England. This last project led Mark into collaboration with the Historical Association and the Runnymede Trust, creating new teaching materials for schools, providing training for teachers and contributing to the content of a new national curriculum for schools in History that focussed on the long history of migration to Britain. One output of this work, 'Our Migration Story', to which his research contributed, won the Guardian award for Research Impact in 2019.

Other new initiatives that flourished in York because of Mark’s leadership and support include the White Rose College of the Arts and Humanities (the AHRC-funded collaborative doctoral training centre), the Centre for Christianity and Culture, the York Festival of Ideas, and the York Medieval Press (an internationally-acclaimed imprint of Boydell and Brewer); all projects that shared his commitment to making scholarship accessible and relevant to the widest possible range of audiences.

Students and colleagues alike remember him above all as a kind and generous man, someone who was always in your corner and wanted you to achieve your best. Underpinning all these achievements was Mark’s very happy home life with Richard, who joined Mark in supporting (and feeding) his extended academic family of students and colleagues. Mark’s professionalism at work was always combined with modesty, good humour, a ready smile, and a generous understanding of colleagues. He laughed a lot and enjoyed life to the full.