Dr John Cooper spoke about the growth of diversity on period television dramas and his experience as a historical consultant. 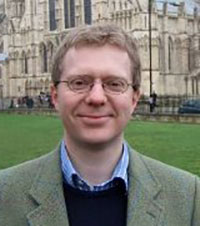 Senior Lecturer in Early Modern History at the University of York, Dr John Cooper, has been interviewed by Canadian broadcaster CBC News regarding his work as a historical consultant for period television drama. The article, Diversity in period TV dramas expected to 'grow and grow', focused on the growing trend that is celebrating ethnic diversity in period film and television drama, even when it’s based in the remote past.

John’s work as advisor to BBC series Gunpowder (with fellow York historian Dr Hannah Greig), is featured as an example of how diversity can be reconciled with historical accuracy. Reporter Deana Sumanac interviewed John for CBC Radio’s ‘The World at Six’, Canada’s flagship news programme. John is currently advising on a major new Tudor-based series for US and UK television, in which diverse casting is a major component.

Read more about Dr John Cooper and his work.