York historians feature in panel on women in China

Two members of the Department of History, PhD candidate Ding Yiyun and Dr Jon Howlett, gave papers in a special panel titled 'Women in China: past and present' at the June 2018 meeting of the York Asia Research Network (YARN). They were joined by Sanna Eriksson from the Centre for Applied Human Rights. 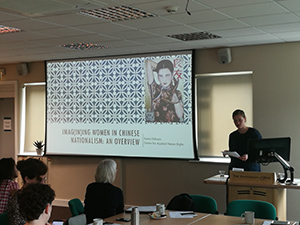 Sanna Erkisson's well-received talk 'Imaging women in Chinese nationalism' charted historical continuities between representations of women and men between the Republican Era (1911-1949) and the present day.

Yiyun's paper, titled 'The Origins and Contradictions of Chinese Feminism in the 1900s to 1920s: A Case Study of China's First Female University President Yang Yinyu', examined the importance of generational and class differences among the first advocates of feminism in China. 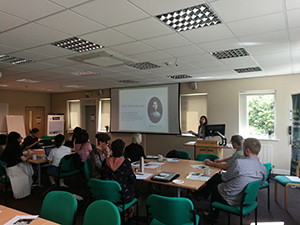 In his talk, 'Looking past the "best man in Shanghai": women and the social history of the decolonisation of China after 1949', Dr Jon Howlett argued for the need to reappraise events normally considered the domain of political and diplomatic historians to include the experiences of a broader range of historical actors.

The panel concluded with a lively question and answer session prompted by audience questions on cultural appropriation, knowledge transfers, feminism and masculinity.

The York Asia Research Network (YARN) is an interdisciplinary group that showcases and supports people across the University whose research interests relate to Asia. Now in its second year, YARN has developed in to a lively, and growing, community of scholars.

Find out more about YARN.