Scientists at the University of York are playing a key role in the quest for a better understanding of how a recently discovered family of enzymes can degrade hard-to-digest biomass into its constituent sugars. 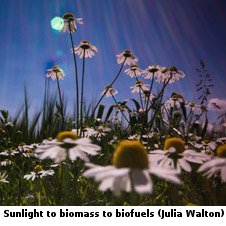 The enzymes – lytic polysaccharide monooxygenases (LPMOs) – are secreted by both fungi and bacteria and have the ability to ‘chip away’ at cellulose and other intractable materials. This allows cellulosic materials such as plant stems, wood chips and cardboard waste, as well as other tricky polysaccharides such as insect/crustacean shells, to be broken down.

Finding a way of breaking down cellulosic materials into their constituent sugars to allow them to be fermented through to bioethanol is a key aim for second-generation biofuel development.

In a recent article in the Proceedings of the National Academy of Sciences (PNAS), an international team of researchers, including Professor Paul Walton and Professor Gideon Davies from York, provided important new information on how LPMOs work.