Professor James Clark's Starbon Technology team have won a Rushlight award for the potential use of starbons in water purification.

Starbons are bio-based materials with a remarkable range of tuneable properties from polar, hydrophilic to polarisable hydrophobic and from starch-like to graphitic. They are made from starchy wastes and other low value polysaccharides including alginates from seaweed. 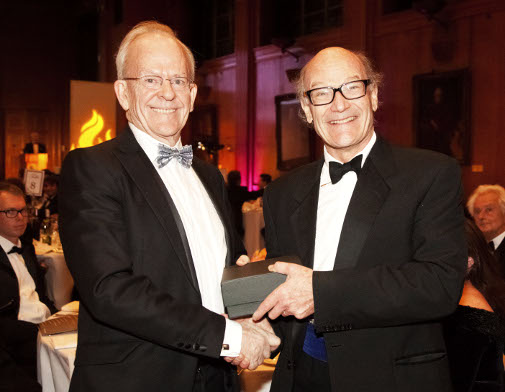 James and Maggie McGowan were there to accept the award at the Rushlight Awards Gala Dinner , which was held at The Royal College of Surgeons of England in London on 31 January. Greg Barker, Minister of State for Energy and Climate Change, was the Guest Speaker. The Rushlight Awards bring together each year the leading organisations which are developing new clean technologies and innovations and those that are supporting them. This is the second time the Green Chemistry Centre has won such an award; the first time was for innovation in recycling.

The Rushlight award is Starbons first but we intend to make sure its not its last!

Starbons were discovered in York following EPSRC funded research on new applications for polysaccharides. They were first reported in the literature in 2006 (Angew. Chem. Int. Ed., 2006, 45, 3782–3786) after they had been patented. A series of follow up articles showed how Starbons modified with acid or base groups and with metals could be used as heterogeneous catalysts, especially in aqueous phase, making them of special interest for future biorefineries. This led to further EPSRC funding where Starbons were proven to be active directly on food waste fermentation broths, greatly simplifying the route from waste to chemicals. The Starbons team also showed how these fascinating materials could be used in separations including chromatography, leading to a collaborative project with Jane Thomas Oates' group, and in water purification. A further EPSRC "Follow on" grant enabled the project to move a new level by collaborating with the UK chemical company Contract Chemicals on scale-up leading to the manufacture of Starbons on hundreds of kilogram scale. By this time, Starbons were attracting a lot of interest with substantial sales by Sigma-Aldrich and publications on their use from outside of York. Starbons became the focus of a new spin-out company Starbon Technologies in 2012, which is currently working with a number of other companies on a range of applications.