Four of the 2014 Royal Society of Chemistry (RSC) prize and award winners are from the University of York. 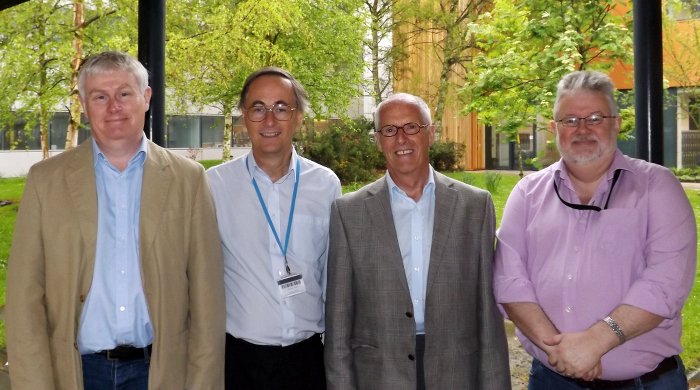 Professor Duncan Bruce, Professor Gideon Davies, Professor Sir John Holman and Professor Michael North, of the Department of Chemistry at York, have been recognised for their achievements and contribution to chemistry. It is highly unusual for four RSC awards to go to a single department in one year.

These awards represent a remarkable success for Chemistry at York and deserved recognition of four outstanding scientists. The awards reflect the Department's global reputation in Green and Environmentally Friendly Chemistry, Liquid Crystals and Novel Materials, Chemical Biology and Biological Chemistry, and Chemical Education and Outreach.

Dr Robert Parker, Chief Executive of the Royal Society of Chemistry said: “Each year we present Prizes and Awards to chemical scientists who have made an outstanding contribution, be that in their area of research, in industry or academia.

“We’re working to shape the future of the chemical sciences for the benefit of science and humanity and these Prizes and Awards give recognition to true excellence.

“Our winners can be very proud to follow in the footsteps of some of the most influential and important chemical scientists in history.”

Professor Sir John Holman is the Royal Society of Chemistry Lord Lewis Prize winner for 2014, a prize that recognises Sir John’s extensive influence over chemistry education policy. As well as being an Emeritus Professor in Chemistry at York, he is adviser in Education at the Wellcome Trust and the Gatsby Foundation. He was the founding Director of the National Science Learning Centre from 2004 until September 2010, and adviser to the English government as National Science, Technology, Engineering and Mathematics (STEM) Director from 2006 until September 2010. He has taught learners of chemistry and science at all levels from 11 year olds to undergraduates and currently teaches chemistry to undergraduates at York.

Professor Davies has been named the Royal Society of Chemistry Khorana Prize winner for 2014, which “recognises outstanding achievement award for research at the chemistry and life science interface”. He works on the chemistry of sugars. He probes their chemistry and cellular biology, focusing on the enzymes that make and break these fascinating molecules. His work has far-reaching societal benefit ranging from industrial enzymes for biotechnology and biofuels, through to understanding the roles sugars play in health and disease. His work on how a specific sugar modifies brain proteins is leading to new therapies for Alzheimer’s diseases.

Professor North is the Royal Society of Chemistry Green Chemistry Award winner for 2014. The Green Chemistry Award is for the design, development or implementation of novel chemical products or processes which have the potential to reduce or eliminate the use and generation of hazardous substances. Professor North’s interest is in making organic chemistry sustainable. Organic chemistry is the study of the structure, properties and reaction of organic molecules (those containing carbon atoms) and is crucial, for example in drug development. However, over 90 per cent of all commercially available organic chemicals are sourced from crude oil. This is unsustainable and a major challenge for chemists is to find renewable, sustainable starting materials. His approach is to understand the details of different chemical processes so that they can be made as effective and sustainable as possible.

Professor Bruce has been named the Royal Society of Chemistry Peter Day Award winner for 2014. His scientific interests are in the area of materials chemistry, mostly involving liquid crystals and transition metals. Liquid crystals represent the fourth state of matter, somewhere between liquids and solids, and are now widely used in liquid crystal displays (LCDs). There is not one distinct phase between solids and liquids so the different phases are described as mesophases. To characterise the different mesophases Professor Bruce’s group use a technique called polarised optical microscopy. His group varies from other research in this field as they investigate the structure and properties of liquid crystals that include a metal atom in their structure.