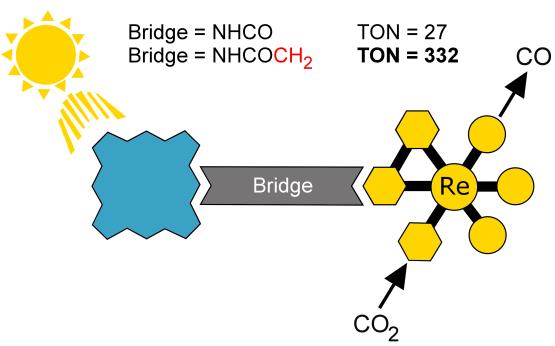 This approach to “solar fuels” provides a product that could be used as a chemical feedstock or as a fuel and is complementary to the established photovoltaic technology. To achieve the photoreduction with visible light, we need a photosensitiser – here the zinc porphyrin – and a catalyst, the rhenium tricarbonyl bipyridine unit.1 This study depended on synthesis and photocatalysis done in York by Chris Windle and ultrafast time-resolved spectroscopy performed by Mike George and his group in Nottingham. We show in this paper that the number of turnovers can be increased by a factor of ten by including a CH2 group in the linker between the two halves of the dyad, so increasing flexibility and removing the last vestige of conjugation. All sounds very logical until we find that the cationic rhenium complexes with methylpyridine as the sixth ligand track the catalytic behaviour of the neutral bromide complexes. This should not happen because their redox potentials are quite different. We also find that the primary photochemical events following light absorption by the dyads with Re-pyridine linkage are totally different from those for the dyads with Re-Br bonds. All this points to these dyads as pre-catalysts, so what then are the real catalytic species – according to our theories partial hydrogenation at the porphyrin may hold the key.