Chemists at the Universities of York and Leeds have made a significant discovery about the cause of the destruction of ozone over oceans. 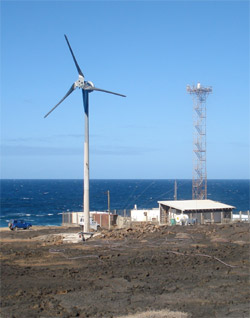 They have established that the majority of ozone-depleting iodine oxide observed over the remote ocean comes from a previously unknown marine source.

The research team found that the principal source of iodine oxide can be explained by emissions of hypoiodous acid (HOI) – a gas not yet considered as being released from the ocean – along with a contribution from molecular iodine (I2).

Since the 1970s when methyl iodide (CH3I) was discovered as ubiquitous in the ocean, the presence of iodine in the atmosphere has been understood to arise mainly from emissions of organic compounds from phytoplankton -- microscopic marine plants.

This new research, which is published in Nature Geoscience, builds on an earlier study which showed that reactive iodine, along with bromine, in the atmosphere is responsible for the destruction of vast amounts of ozone – around 50 per cent more than predicted by the world’s most advanced climate models – in the lower atmosphere over the tropical Atlantic Ocean.

Professor Lucy Carpenter, of the Department of Chemistry at York, said: “Our laboratory and modelling studies show that these gases are produced from the reaction of atmospheric ozone with iodide on the sea surface interfacial layer, at a rate which is highly significant for the chemistry of the marine atmosphere.

“Our research reveals an important negative feedback for ozone – a sort of self-destruct mechanism. The more ozone there is, the more gaseous halogens are created which destroy it. The research also has implications for the way that radionucleides of iodine in seawater, released into the ocean mainly from nuclear reprocessing facilities, can be re-emitted into the atmosphere.”

Professor John Plane, from the University of Leeds’ School of Chemistry, said: “This mechanism of iodine release into the atmosphere appears to be particularly important over tropical oceans, where measurements show that there is more iodide in seawater available to react with ozone. The rate of the process also appears to be faster in warmer water. The negative feedback for ozone should therefore be particularly important for removing ozone in the outflows of pollution from major cities in the coastal tropics.”