Chemists from the University of York are part of a UK team which has made an important step towards new malaria treatments by identifying a way to stop malaria parasites from multiplying. 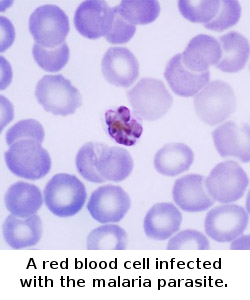 In a study published in Nature Chemistry, the research team shows that the activity of an enzyme called NMT is essential for the survival and viability of the most common malaria parasite. The team, which includes researchers from the York Structural Biology Laboratory in the Department of Chemistry at York, are working to design molecules that inhibit NMT’s function, and hope to start clinical trials of potential treatments within four years.

An estimated 1.2 million people died from malaria in 2010. Although a variety of antimalarial drugs are available, some strains of the parasite are resistant to treatment. These strains are becoming more common, with treatment failures reported across multiple frontline drugs. If acute illness is cured, the parasite can remain dormant in the blood and return to cause illness later. Malaria vaccines have been researched intensively, but none have been introduced into clinical practice.

The researchers have tested a handful of molecules that block the activity of NMT in the parasite living inside human red blood cells, but further refinement will be needed before a treatment is ready to be tested in humans.

Professor Tony Wilkinson, of YSBL, said researchers at York carried out X-ray analysis of crystals of NMT to establish the mechanisms by which these molecules inhibit the action of the enzyme.

The project has blended imaginative medicinal and analytical chemistry with protein crystallography and cell biology to define a new drug target in the fight against malaria, a major cause of human disease. While the research was targeted strategically towards drug discovery, it has given fundamental insights into how malaria parasites function.

Dr Ed Tate, from the Department of Chemistry at Imperial College London, who led the project, said: “Here, we’ve shown not only why NMT is essential for a wide range of important processes in the parasite, but also that we can design molecules that stop it from working during infection. It has so many functions that we think blocking it could be effective at preventing long-term disease and transmission, in addition to treating acute malaria. We expect it to work not just on Plasmodium falciparum, the most common malaria parasite, but the other species as well.

“We need to do some more work in the lab to find the best candidate molecule to take into clinical trials, but hopefully we’ll be ready to do that within a few years.”