Four Teesside school children helped Chemistry Department staff promote a new scheme to motivate children to study science when they met MPs and business leaders at the House of Commons. 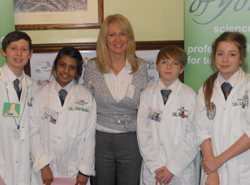 The four pupils, aged 12 and 13, from St Michael’s Roman Catholic School in Billingham, worked on a Future Scientist Programme pilot with CIEC Promoting Science - a group based in the University of York’s Department of Chemistry, and Johnson Matthey Catalysts of Billingham.

CIEC Promoting Science aims to show how industry touches our lives, as well as enhance the effective teaching of science.

Both projects are aimed at teachers, children and science-based manufacturing companies, and encourage children to tackle real problems encountered in science-based industries, improving the children’s motivation and understanding.

The event provided the perfect platform to explain how this exciting new project is expanding on the excellent work of the Children Challenging Industry project in primary schools. Feedback from the children involved in the pilot was extremely positive, with many commenting on what a difference it made to learn through real-life scenarios rather than textbooks.

The children we took to London are enthusiastic ambassadors for the scheme and were able to explain to MPs and industry leaders how they have been inspired and motivated to become more involved in opportunities to study science.”

Ellie Redhead, 12, one of the children attending the event at Westminster, said: “This project has shown us what real scientists and industry are about. It has reminded us of our first industrial experience in Year 6.”