New theoretical studies predict that S2N2 is the first example of an inorganic ring that can switch its aromaticity on electronic excitation.

Disulfur dintiride (S2N2) was first formally reported by Frank Burt, working at University College London over 100 years ago. Burt reported passing S4N4 vapour over a silver gauze, producing a blue film or bronze coloured crystal and suggested that its immediate precursor was a very volatile substance. Other researchers went on to establish that this volatile substance was S2N2, which subsequently polymerises to (SN)x.

In the years since, the nature of the bonding in the square, four-membered inorganic ring has been the subject of considerable controversy, with a variety of bonding models being suggested on the basis of theoretical studies, and incorporated into textbooks.

The latest study from Dr Peter Karadakov and co-workers calculates and analyses the magnetic shielding surrounding the molecule for each electronic state. In this way, they have shown that for S2N2, whereas the ground state is aromatic, and has delocalised bonding electrons around the ring, the singlet excited state is profoundly anti-aromatic – to the extent that bonding interactions are completely removed. This helps explain the experimental observation that S2N2 can decompose explosively when being struck or heated above 30°C. 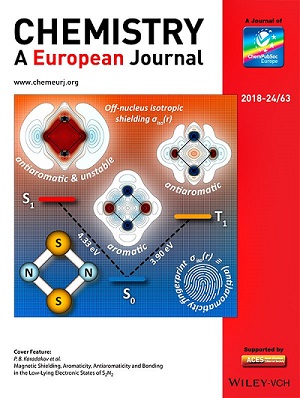 S2N2 is therefore the first example of an inorganic ring for which theory predicts aromaticity switching upon electronic excitation.  The results of this study demonstrate that the range of compounds with “Jekyll and Hyde” behaviour in different electronic states is wider than previously thought, providing new directions in the search for molecules with tuneable properties, for applications in electronics, photovoltaics and molecular motors.

The research has been published in Chemistry A European Journal, where it was selected by reviewers and editors as a Very Important Paper.