Dr Glyn Hemsworth, of the York Structural Biology Laboratory (YSBL) (Department of Chemistry) has won a prestigious Early Career Research Award of the Biochemical Society, in the theme area of Biotechnology (2015). 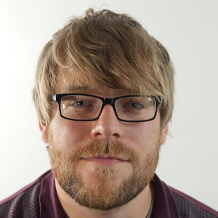 These awards recognise the impact of research carried out by early career scientists (with no more than five years’ postdoctoral research experience) who have produced international-quality research outputs, and demonstrate aspirations consistent with the potential to achieve world-leading status. The awards are structured to recognise the breadth of science across the Biochemical Society's Theme Panels (calls for nominations are made on a two-year cycle across eight theme areas).

Glyn’s research focuses on carbohydrate-active enzymes and their component domains, notably those involved in xyloglucan degradation and biomass conversion.  He has performed extensive structural and spectroscopic investigation of the newly-discovered copper-dependent lytic polysaccharide monooxygenases.  Having completed his PhD at the University of Sheffield under the supervision of Professor Peter Artymiuk, he joined YSBL in 2009 and worked for Professor Keith Wilson on the structural biology of dUTPases and other nucleoside enzymes from Leishmania and Trypanosoma (an EC-funded project), before joining the Davies group in 2012.