Fire down below: the natural cycle’s impact on air quality

Chemists from the University of York are playing a key role in an experiment to measure polluting emissions from forest fires in Canada.

A team from the Department of Chemistry is involved in monitoring emissions using aircraft and satellites. Their mission is to gather data on the extent to which the fires affect levels of atmospheric pollutants such as ozone and the way those pollutants interact.

The aim is to provide more focused air quality forecasts particularly as naturally-occurring boreal fires are expected to be more frequent as the climate changes. 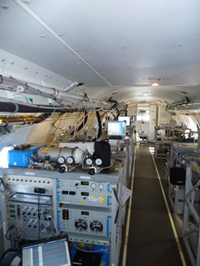 The aircraft, a converted BAe146 managed by the UK Facility for Airborne Atmospheric Measurements, uses on-board equipment collect gases and particles, such as nitrogen oxide, emitted by wildfires. Up to 64 canisters of emissions are collected on each flight and they are analysed on the ground to establish the concentrations of chemicals.

Professor Lewis said: 'Despite their distance from us in the UK, the emissions from Canadian forest fires reach the UK regularly in summer and can be responsible for elevations in ozone and particles. We know rather little however about how these plumes change and disperse as they travel over the Atlantic – aircraft and satellites give us new ways of studying the chemistry that is occurring.'

Meanwhile, a group led by Professor Peter Bernath, is monitoring the emissions using satellite technology. Much of the data is being gathered by the Atmospheric Chemistry Experiment (ACE) satellite mission that Professor Bernath helped to establish eight years ago. ACE’s original objective was to monitor the ozone layer, but it is now used principally to monitor air quality and atmospheric pollution.

Professor Bernath said: “The aircraft monitoring gives important data about the chemical concentrations within the plume, but the satellite data provides the overall context.” 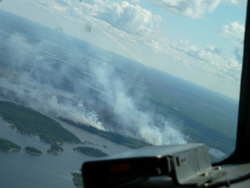 The scientists want to understand how the pollutants disperse in the air over time. They believe their findings will help to estimate the impact of North American forest fires on air quality in Europe and beyond.

Sarah Moller, a chemistry post-doctoral fellow at York, who is analyzing nitrogen oxide emissions, is also responsible for outreach for the project

The research supported by the Natural Environment Research Council is a collaboration between York and the Universities of Leeds and Edinburgh in the UK and Dalhousie University in Canada.