Scientists have determined the structure of the enzyme endomannosidase, significantly advancing our understanding of how a group of devastating human viruses including HIV and Hepatitis C hijack human enzymes to reproduce and cause disease. 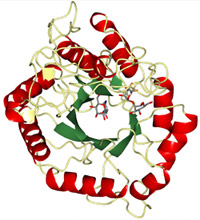 The findings open the door to the development of new drugs to combat these deadly viruses that infect more than 180 million people worldwide.

Professor Davies, of the Department of Chemistry at York, said that knowing the structure of the enzyme revealed details on how viruses play biological “piggy-back”, borrowing our cellular machinery to replicate and cause disease.

“If we understand how the viruses use our enzymes, we can develop inhibitors that block the pathway they require, opening the door to drug developments,” he said.

In the past the problem has been that this group of viruses including HIV, Hepatitis C, Dengue Fever and West Nile virus, are able to bypass the main pathway if inhibited and replicate via a second pathway using this enzyme. Thus for a treatment to be effective, both pathways need to be blocked.

“We hope that the work will lead beyond viruses and will point the way towards similar treatments for other diseases including cancer.”

“It was already known how to block the main pathway for these viruses but until now, this endomannosidase bypass pathway has proved a considerable challenge to study,” Professor Davies said.

Dr Williams said: “Combining international resources and expertise, we were able to determine the endomannosidase structure and this has revealed how we can block the bypass route, stopping the viruses from hijacking human enzymes.”

The study is published in the Proceedings of the National Academy of Sciences (PNAS) this week.