Carbohydrates are often considered the ‘Cinderella’ molecules of biology yet they are a feature of an increasing number of medicines, from small molecule drugs to protein therapeutics or vaccines. 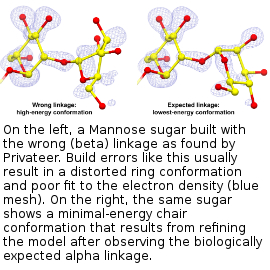 This presents challenges for medicine and science because carbohydrates are often ignored or are poorly defined in the databases on which the modern world relies for scientific and medical development.

Now a team from the York Structural Biology Laboratory (YSBL) in the Department of Chemistry at the University of York has produced user-friendly software called Privateer that enables scientists to analyse and study the three-dimensional structure of carbohydrates facilitating their exploitation in academic and modern medicine. The work is published in Nature Structure and Molecular Biology.

Dr Jon Agirre, of YSBL and lead author of the software package, said: “Earlier this year we uncovered a problem involving unlikely ring conformations that systematically affects about 30 per cent – thousands - of the publically available carbohydrate structures. We needed to solve this issue in a timely manner, as the deposition rate of protein-carbohydrate structures is increasing fast.”

The software is able to scan a protein structure for carbohydrate molecules, comparing their expected stereo- and regio-chemistry, and ring conformation with prior glycobiological knowledge. Privateer also connects to established crystallographic packages such as Coot or Refmac5 for fixing any mistakes easily. In addition, it reports quality-of-fit indicators and produces unbiased electron density maps to assess sugar identification.

A co-author of the study, Professor Gideon Davies, of YSBL, said: “At last, sugar molecules will be treated with the same respect afforded to DNA and proteins.”

The Privateer software is distributed through the Computational Computing Project no. 4 (CCP4), one of the major program suites in structural biology, in which York scientists play an important role. CCP4 is used by both academic and commercial structural biologists worldwide.

Dr Agirre added: “We are excited to see the community using it more and more; one of the many tools that the University is developing to aid the impact of science for the general public.”